Hydro Ottawa reported more than 74,000 still without power as of 1:30 p.m. Tuesday, Crews have restored power to 106,000 customers to power in the last three days.

“Restoration efforts will continue 24/7 until all residents are reconnected,” Hydro Ottawa said in a news release.

City officials are holding a briefing at 4 p.m. with the latest on storm recovery efforts. You can watch it live on this page.

More than three dozen roads are still impassable due to downed trees and hydro lines, Mayor Jim Watson said Tuesday morning. Residents are being asked to stay off the roads if they can. OC Transpo is reporting some detoured buses.

The city is opening respite centres starting 10 a.m. Tuesday for people who need electricity, water, food and shelter. You can see a full list here. There are also disposal bins set up at four locations for spoiled food, and the city is conducting a green bin blitz to collect food waste. Many city services are closed on Tuesday.

“We are hoping that tomorrow the majority of our students will be back in school,” adding that parents can expect more information Tuesday afternoon.

Some schools without power could look at remote learning if the surrounding neighbourhoods have power, he said.

Most OCSB properties suffered some sort of damage. That includes St. Monica School on Merivale Road, which saw part of its roof blow off.

Hydro Ottawa has removed its outage map temporarily, saying it doesn’t reflect the current situation and the full extent of crews’ progress “due to the number of individual and complex overlapping outages.”

“Given the number of separate events and the extent of damage to electrical equipment, this continues to be a multi-day restoration effort,” Hydro Ottawa said in the news release. “After critical institutions and emergency services, power restoration work is prioritized to outages affecting large neighbourhoods with the largest number of customers, followed by smaller areas.”

Hydro Ottawa’s president and CEO estimated Monday evening that it will take another two to four days to get most customers reconnected to the power grid.

The extent of the damage is unlike any other disaster the city has seen, including the 1998 ice storm and the 2018 tornadoes, Bryce Conrad said.

Hydro crews from New Brunswick are on the ground helping Ottawa workers. Workers from Toronto and Kingston are arriving Tuesday.

Including areas of eastern Ontario and west Quebec, about 150,000 customers are still without electricity. 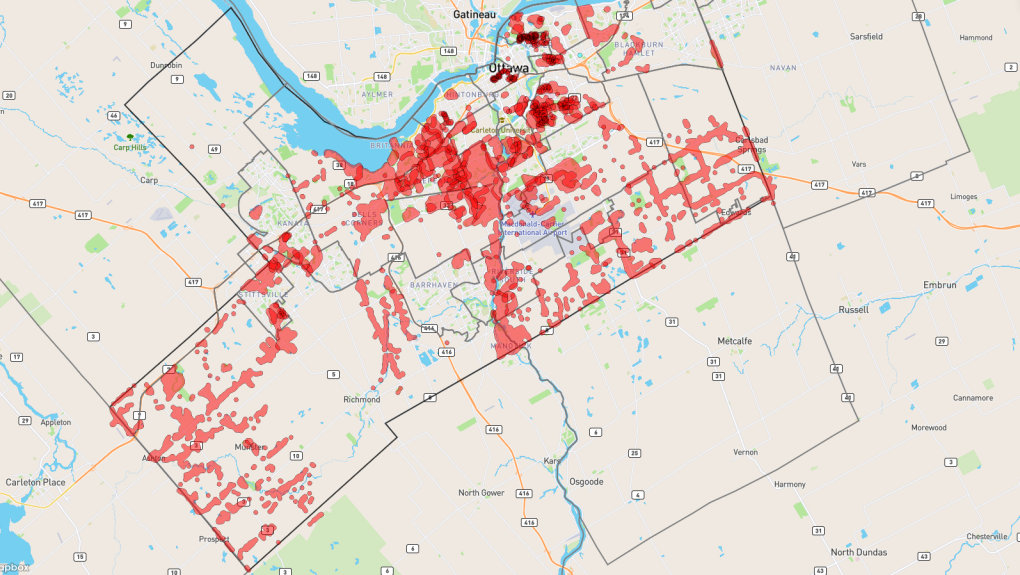 Hydro Ottawa’s outage map as of 11 a.m. on Tuesday. More than 106,000 homes have had power restored, with about 74,000 still experiencing a power outage. (Hydro Ottawa)

At least nine people across Ontario were killed in the destructive storm on Saturday, including three in the Ottawa area.

Mayor Jim Watson said Tuesday morning the cost of the cleanup will run into the millions of dollars, including the cost of bringing in hundreds of employees in on a long weekend, reimbursing other jurisdictions for their resources and running the respite centres.

“We don’t have an estimate at this point,” he told CTV Morning Live on Tuesday. “But we’re not in the business of penny-pinching during an emergency like this. We have to make sure that we get as many resources as quickly as possible to help people, because their lives have been turned upside-down.”

A city council meeting scheduled for Wednesday has been cancelled.