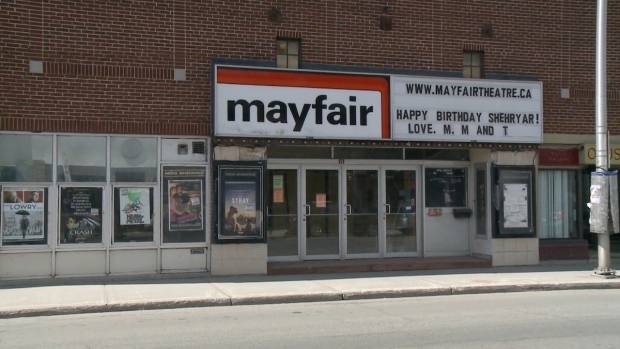 OTTAWA — Over twenty musicians are taking part in a two-day live concert this weekend, rallying to support the Mayfair Theatre. And you will be able to watch the concert virtually.

The Mayfair Theatre is beloved by many in Old Ottawa South, and across the city.

Like many businesses impacted by the pandemic, they’ve had to adapt.

“You look back, and the Mayfair has survived world wars; and, this is a crazy thing, the invention of the television, and then the VCR. It’s made it past a lot, we are very confident that we’ll be back next year,” says Stafford.

Unable to show movies during a lockdown, and restricted to small audiences the rest of the year, Stafford says the cinema is bringing money in by renting out the marquee to make an announcement or wish somebody a happy birthday, selling off movie trailers, using government grants, and with support from the community.

“People have just been tripping over themselves to help us out.”

Like the support from the musicians who are putting on a two-day concert this weekend.

“This event will include a demonstration of this remarkable platform for musicians to perform together from different locations at the same time – live!” says Chris White, one of the co-organizers of this weekend’s concert.

Yes, a live concert. Over twenty artists will play from their own home. The audience will be able to stream on YouTube, or purchase a ‘pay-what-you-can’, ticket for a suggested $15 through Eventbrite.

“The beautiful thing is the way it has all come together, with everyone coming together; everybody loves the Mayfair,” says White.

Musicians, like Catriona Sturton are excited to take part.

“People realize that art is a really important thing that has gotten them through this challenging time that we’re in,” Sturton says.

She’s offering support by performing, putting in effort to make sure there’s a theatre in the future.

Stafford is thankful for the efforts.

“Every bit of money coming towards us is very well appreciated, and will be made use of because we’re just not screening movies right now.”

The concert takes place Saturday at 7 p.m. and Sunday at 2 p.m. There is also an online auction, as well as a GoFundMe page, where you can donate.