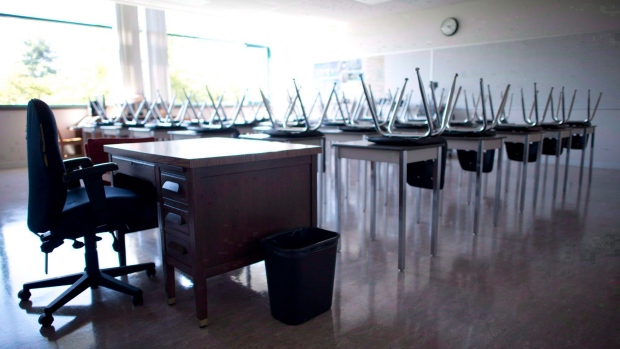 OTTAWA — Ottawa students won’t return to classrooms until September, the province has announced.

Premier Doug Ford said Wednesday that schools across Ontario won’t reopen for in-person learning for the final month of the school year. Ford told reporters the move to keep schools closed will protect families from the B.1.617 COVID variant and allow for higher rates of vaccination of students, staff and families.

“At a time when our top priority is putting the third wave behind us so that we can safely enter Step One of our Roadmap to Reopen, we can’t risk increased cases and potential downstream impacts on hospitals and ICUs,” said Ford in a statement. “Making this tough decision now will allow kids to safely enjoy camps and outdoor activities this summer, and a safe return to school in September.”

On Twitter, CHEO President and CEO Alex Munter said he’s saddened that schools will remain closed until the fall.

“Ontario kids have been out of school longer than children almost anywhere else in the world,” said Munter. “I am overwhelmed by sadness by all of this. It feels like we adults have let our children down.”

“When it comes to our students, Ontario’s future, the provincial government, time and again, has got it wrong with respect prioritizing student well-being and learning during the pandemic,” said Fisher on Twitter.

“These are my kids. They’re hurt. They’re frustrated. They’re crying. They want to be back in school, in front of educators and their peers. They want to learn. How dare you suggest an earlier reopening of the Ontario economy if you can’t even manage to get schools open.”

Eastern Ontario’s medical officer of health says Ontario should have proceeded with a regional approach to reopening schools this month, with a chance to salvage the final three weeks of the school year for in-person learning.

“I still think that the buts are manageable. I think that still there was a chance that we could have salvaged three-four weeks, but I do recognize that it’s a hard decision.”

Roumeliotis notes there is a consensus among many organizations that schools should reopen, but Ontario is looking at finding a balance between opening schools and opening the economy later this month.

“I think the compromise would have been at least look at a regional level, then you could decide at the local level,” said Roumeliotis Wednesday morning.

“School boards would play a role and say, ‘Yeah, you know what it makes sense that elementary would open and high schools wouldn’t.’ I think it should have been left at the regional level, but we’ll see what happens.”

The Ontario Science Advisory Table backed a return to the classroom, nothing that an expected six to 11 per cent increase in transmission, as a result of opening schools, would be “manageable.”

“The return to school doesn’t mean that infections are going to occur in the schools, it means that the associated mobility with kids going back to school and parents leaving their home and so on, might cause a bit of an increase in infections,” said Roumeliotis.

Carroll asked Dr. Roumeliotis if Ontario could reopen schools this week, and still enter Step 1 of Ontario’s Roadmap to Reopen plan in a week or two, which includes opening non-essential businesses and restaurant patios.

“I believe that with the precautions that are in place, with that the way our numbers are going, with the vaccination rates going higher than expected, with those I don’t think that it would have made a dent or affected the other reopening that’s scheduled to take place at Step 1.”

The final day of classes for Ottawa Carleton District School Board elementary schools is Friday, June 25, while secondary schools are scheduled to finish exams on June 22.

The final day of classes for elementary schools with the Ottawa Catholic School Board is Thursday, June 24, while secondary schools are scheduled to finish exams on June 23.