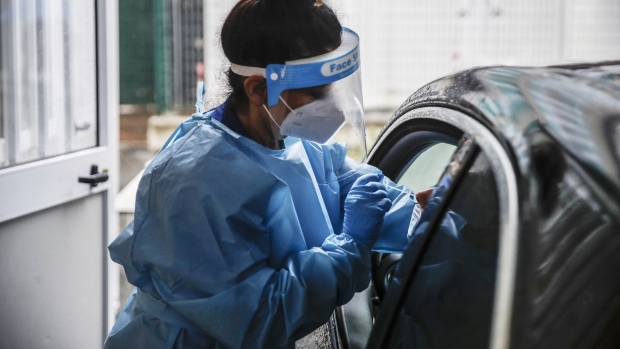 TORONTO — Ontario has logged more than 1,500 new COVID-19 cases for the second time this week, marking another new record in daily-reported infections in the province.

Health officials reported 1,581 new infections on Saturday, an increase from the 1,396 cases reported a day earlier.

Ontario has also added 20 more deaths, which is the highest single-day death toll reported since the start of the pandemic’s second wave.

Saturday’s new cases also mark a new record for the province, surpassing Thursday’s 1,575 cases. It is also the ninth day in a row that Ontario has seen case counts reaching the quadruple digits.

Ontario’s seven-day average for number of cases reported continues to climb and is now 1,419.

The data prompted Premier Doug Ford to say that he would “not hesitate for a second” in placing the province in lockdown if the numbers continue to increase.

“We need to be clear about what’s at stake. We’re staring down the barrel of another lockdown.”

According to Saturday’s epidemiology report, seniors continue to be hardest hit by the pandemic—although the majority of daily cases continue to be seen in people between the ages of 20 and 39.

However, most of the deaths reported have been in people over the age of 79. In total, 2,306 of the 3,332 deaths recorded since the beginning of the pandemic in Ontario have been within this age group.

As of Saturday, there are 502 people in Ontario hospitals being treated for COVID-19. This is an increase of 50 people in the last 24-hour period.

Of those in hospital, 107 are in the intensive care unit (ICU) and 66 are breathing with the assistance of a ventilator.

According to the province, once there are more than 150 COVID-19 patients being treated in the ICU, other non-COVID-19 care and scheduled surgeries can be impacted.

Once it exceeds 350 people, the government said it becomes “impossible” to handle.

Where are the COVID-19 cases?

The majority of COVID-19 cases were found within Ontario’s COVID-19 hot spots, however the number of other regions with more than 10 infections continues to grow.

On Saturday, Toronto moved into the province’s “red zone,” which puts restrictions on indoor dining, fitness facilities and gaming establishments.

The city itself has also implemented further restrictions to help curb the spread of COVID-19. This includes banning indoor dining completely, as well as fitness classes and gaming establishments.

Officials also urged residents not to socialize with people outside of their household.

The province processed a little more than 44,800 tests in the last 24 hours, bringing the positivity rate in Ontario to 4.2.

There are currently 39,767 tests remaining under investigation in the province.