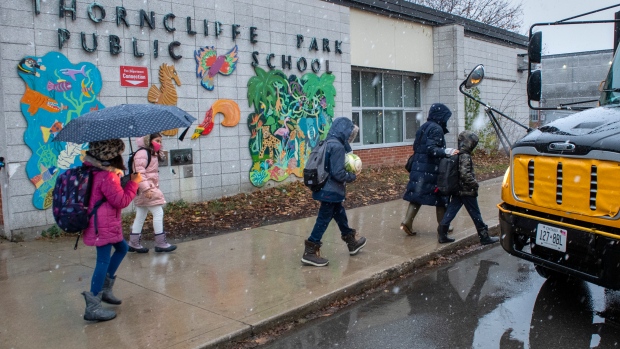 TORONTO — Health Minister Christine Elliot is acknowledging that her government is now “looking at all options” to curb the spread of COVID-19 including ones involving the public school system.

Elliott made the comment to reporters during a news conference on Thursday morning, one day after the Ministry of Education sent a memo to all school boards in the province asking them to be prepared to switch to remote learning if it is deemed necessary.

“It has always been important to us to keep our schools open because that is really important for students to learn and for their physical and mental health as well. Now we are seeing the numbers of cases rise tremendously and so we are looking at all options, including schools,” she said.

Education staff at the TDSB released an open letter earlier this month calling for in-person learning to be suspended for two weeks following the holiday break in order to prevent further spread of COVID-19.

Education Minister Stephen Lecce has, however, resisted that idea so far. In a statement released on Dec. 9 he said that experts have “made clear that cases are overwhelmingly not being transmitted within our schools” and that the “the risk remains from our community.”

But in recent days the number of staff and student cases has surged, so much so that Toronto Public Health has now ordered the closure of 15 different schools until Jan. 4.

The York Catholic District School Board has also switched its secondary schools to remote-only learning for the final three days of instruction before the holiday break.

“Since the beginning of the year we have been asking our schools and our classes to be prepared to flip over to remote learning and that is because what we have been seeing over recent months, not only the individual classes being asked to isolate as a result of a COVID case, but also to be prepared if for some reason they (the province) decide to flip the entire system over to remote learning,” TDSB spokesperson Ryan Bird told CP24 on Thursday morning.

Bird said that the TDSB has “received no indication” that it will be asked to move to online-only learning at this point but he said that the board does want parents to at least prepare for that possibility.

To that end, he said that a memo went out to parents on Wednesday warning of the possibility and encouraging them to make sure that important items are not left at school over the holidays.

“The simple side of is that if kids have indoor shoes, or there if food still at schools, or of there is clothes you might need over then holidays or beyond we want you to bring that home,” he said. “The access to technology piece, we just want to make sure that everyone does have access to technology. The close to 60,000 devices that we shared last school year when the pandemic started, a large majority of those are still out in the system. So tens of thousands of students already have a device but we want to make sure that if anyone else needs one as a result of this potential closure, that they notify the school.”

Ford government officials have consistently spoken of a need to prioritize keeping schools open as part of the government’s COVID-19 response.

But with Ontario reporting a record 2,432 new cases of COVID-19 some are beginning to question the approach.

Last week, Windsor’s Medical Officer of Health took matters into his own hands, ordering that all schools under his jurisdiction switch to remote learning only until after the holiday break.

“Parents, kids and staff in our schools deserve a plan that is a lot more sophisticated than simply open or closed,” the NDP’s education critic, Marit Stiles, told reporters at Queen’s Park on Thursday. “There is months and months left of this pandemic and we need a strategy in place that will protect kids until this pandemic nightmare is over.”

There have been more than 7,000 confirmed cases of COVID-19 associated with Ontario schools since the beginning of September.

Nearly 20 per cent of schools had at least one active case as of Thursday.