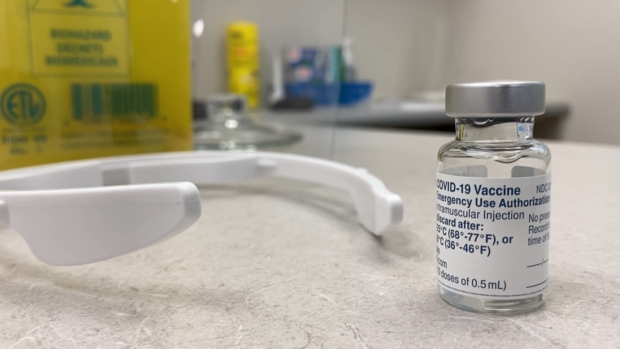 OTTAWA — A Kingston pharmacist says it’s all hands on deck to get thousands of AstraZeneca COVID-19 vaccine doses in arms before they expire.

About 45,000 doses of the AstraZeneca vaccine sent to Ontario are set to expire May 31. The doses have been reallocated to pharmacies in Kingston, Toronto, and Windsor in order to get the required second dose to people who participated in a provincial pilot project in March.

Earlier in May, Ontario paused administration of first doses of the AstraZeneca vaccine because of an increase in reports of rare but sometimes deadly blood clots after the first dose. Evidence suggests the risk of blood clots is significantly lower for people’s second dose and so, after some delay, Ontario resumed offering the vaccine to people who had already received one shot.

Speaking on Newstalk 580 CFRA’s “Ottawa Now with Kristy Cameron” on Friday, Jen Baker, pharmacist and owner of Loyalist Pharmacy in Kingston said she and her staff are working around to clock to make sure no dose goes to waste.

“In the Kingston region, we have all doses booked at this time,” Baker said. “There are no pharmacies that have the second doses of AstraZeneca that are able to accept anymore appointments, I believe, at this point in time.”

Baker said as many as 1,200 doses will be administered this weekend at her pharmacy alone.

“We have all hands on deck. We are going all weekend long,” she said.

Kingston was one of the three health regions in Ontario that received the first shipments of the AstraZeneca vaccine. Thousands of people were given their first shots between March 10 and 19, and those individuals are now the priority for second doses, Baker said.

“The ideal is that we get your second dose somewhere around 12 weeks. If we get it earlier, we may have slightly lower efficacy against the mild to moderate disease. That’s what these regions were prioritized for these doses because we were the places that had the first set of vaccines go into arms, so we have the greatest length of time in between those doses,” she said.

The Kingston, Frontenac, Lennox & Addington Public Health unit is asking people not to contact pharmacies directly at this time regarding their second dose of AstraZeneca if they received it after March 19. The health unit says pharmacy updates are available at ygkvax.com.

Ottawa Public Health data show 7,839 Ottawans received a first dose of AstraZeneca elsewhere in Ontario and, as of Thursday night, 703 of them have had both shots.

Baker, who is also chair of the board of directors for the Ontario Pharmacists Association, urged people from Ottawa who travelled to Kingston for their first shot to be patient.

“No matter whether you get it this week or in the coming weeks, we have a second dose for you,” she said. “We just don’t have the exact timing on when our next shipment is going to come in; however, with second doses, we will be getting through to everyone who had that first dose.”

Baker said, however, that it’s unclear whether everyone who got a first dose of AstraZeneca will receive the same vaccine for their second dose.

“We’re still waiting on information because the National Advisory Committee on Immunization (NACI) is going to be reviewing the evidence on mixing vaccines. That information will increase the supply available to people who got AstraZeneca, if it is approved,” she said. “We don’t have that information yet but what I’ve been telling people is if you’re on my list, we will be sending you emails to let you know as soon as we know.”

NACI has recommended that vaccination series be completed with the same vaccine or the same type of vaccine whenever possible, but the guidelines around providing an mRNA vaccine, such as the Pfizer-BioNTech vaccine or the Moderna vaccine, after one of dose of the AstraZeneca vaccine are expected to be released in June.

“Recommendations on which vaccine product to complete a vaccine series in individuals who have received one dose of the AstraZeneca COVID-19 vaccine will be forthcoming after further evidence on mixed COVID-19 vaccine schedules is available,” according to a statement put out by the committee last week.