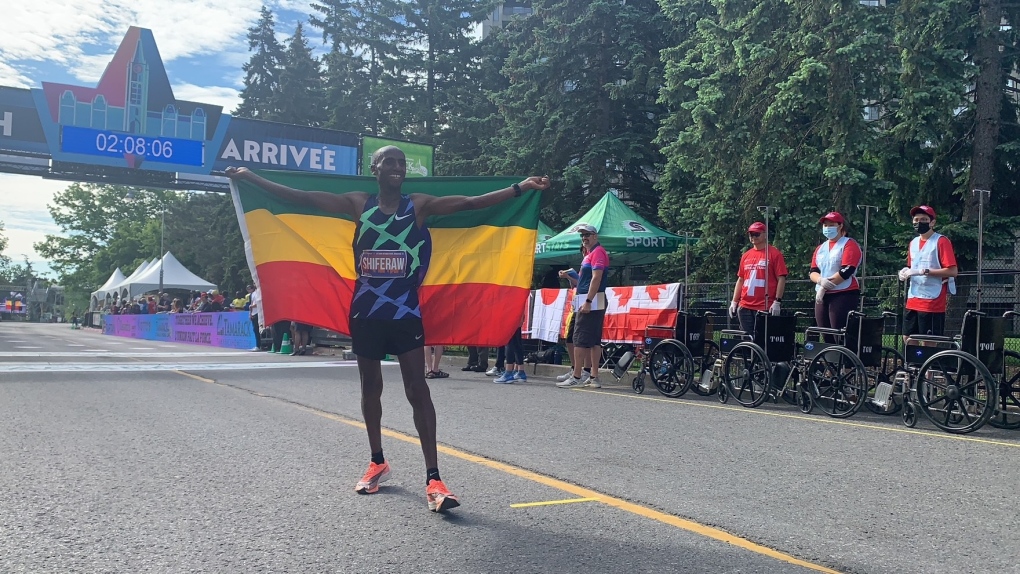 Ethiopia’s Andualem Shiferaw was the first to cross the finish line at the Ottawa Marathon Sunday, setting a new course record for the race in the nation’s capital.

Shiferaw, 30, completed the signature event of Tamarack Ottawa Race Weekend with a time of 2:06:04 beating the previous record of 2:06:54, set by Yemane Tsegay, also of Ethiopia, in 2014.

Shiferaw’s race wasn’t the only record set this year. Rejeanne Fairhead set a Canadian record by completing the 5K race at 95 years of age on Saturday.

Justin Kent, 30, was the first Canadian to cross the finish line with a time of 2:13:34 making it a personal best for the Vancouverite. He finished sixth overall among men.

Kinsey Middleton was the first Canadian woman to cross the finish line, coming in first place among women overall, at a time of 2:30:09. The 29-year-old took the top prize at the Tartan Ottawa International Marathon and is the first Canadian woman to do so since 2007, organizers said. Elissa Legault, who finished second among women, is also Canadian.

“Today’s outstanding performances by our winners is rewarding on so many levels,” said Dylan Wykes, Elite Athlete Coordinator for the Tamarack Ottawa Race Weekend in a news release. “The Ottawa course delivered great results for elite athletes, who continue to make Ottawa a highly competitive race destination. It’s especially thrilling to see our Canadian athletes shine so bright in an international competition.”

This was the first time since 2019 that Ottawa Race Weekend ran in-person events. Races were held virtually in 2020 and 2021 because of the COVID-19 pandemic. Organizers say more than 25,000 people took part in races this weekend, including 3,274 in the marathon.

“After two years of virtual races, Run Ottawa was thrilled to stage a return to live racing at this year’s Tamarack Ottawa Race Weekend,” said Race Director Ian Fraser. “We were equally proud to host a strong field of elite athletes and to hold six race events for close to 25,700 participants. We also want to express our heartfelt thanks to everyone who raised funds for charities and to the more than 2,500 volunteers who helped make this weekend’s events a great success.”