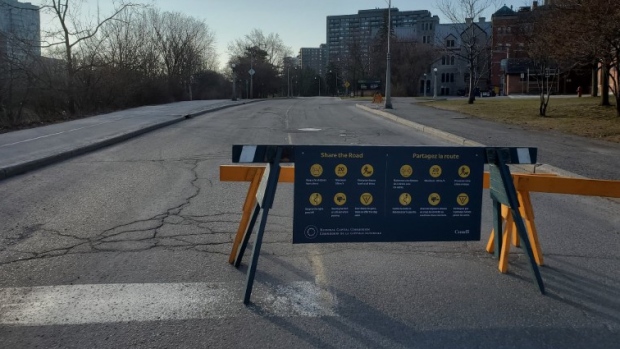 OTTAWA — You will have more space to get some exercise along the Rideau Canal and Ottawa River this weekend.

The National Capital Commission says in light of Ontario’s stay-at-home order, it will create more outdoor space for exercise again this weekend.

For the second straight weekend, the Queen Elizabeth Driveway, the Sir John A. Macdonald Parkway and the Sir George-Etienne Cartier Parkway will be closed to motor vehicle traffic on Saturday and Sunday.

Here is a look at the road closures:

Both lanes of the Queen Elizabeth Driveway, located on the west side of the Rideau Canal, from Fifth Avenue to Somerset Street.

Both westbound lanes of the Sir John A. Macdonald Parkway, located on the south side of the Ottawa River just west of the downtown core, from Booth Street to Carling Avenue.

Both lanes of the Sir George-Étienne Cartier Parkway, running along the south side of the Ottawa River, just east of the downtown core, between the Aviation Parkway and St. Joseph Boulevard in Orléans.