The hockey great died April 22 of lung cancer and will be laid to rest at the Mary, Queen of the World Cathedral in downtown Montreal at 11 a.m.

“Today’s a day to say thank you to Guy Lafleur for everything he gave us over so many years, all the wins, all the inspiration, the incredible games he played, but also his deep humanity. His contributions to the world around him was legendary and an inspiration to us all,” the prime minister said before entering the church.

The ceremony will be broadcast live on all major television networks, including CTV and streamed online at CTVNewsMontreal.ca, beginning at 10 a.m.

Thousands of fans have visited the Bell Centre over the past two days to pay tribute to the NHL Hall of Famer, as he was lying in state.

Nicknamed “the Flower” and “Le Demon Blond” in French, Lafleur was a five-time Stanley Cup champion, having played for the Canadiens, New York Rangers and Quebec Nordiques. 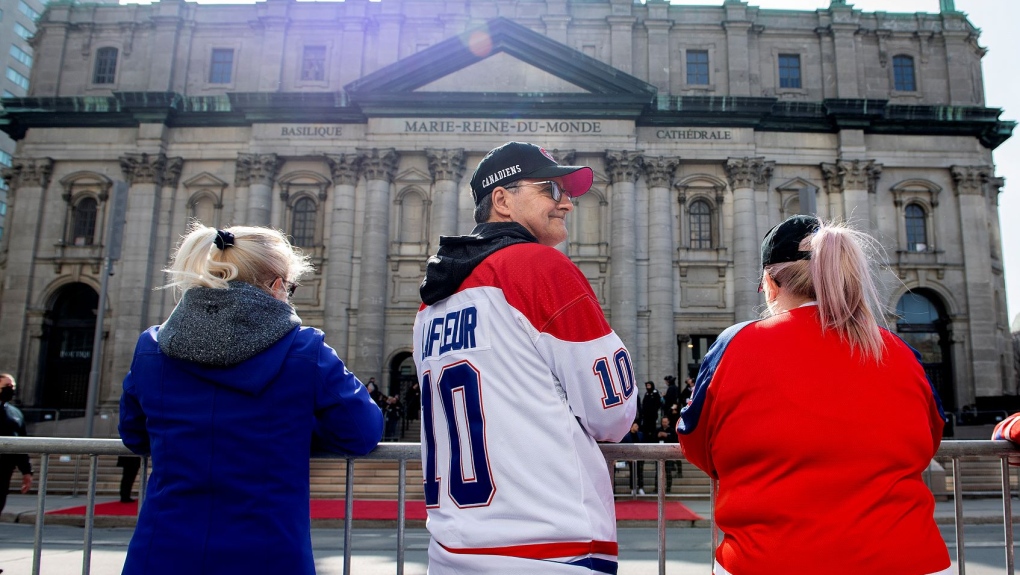 Fans stand outside the funeral of hockey great Guy Lafleur at Mary Queen of the World Cathedral in Montreal, Tuesday May 3, 2022. THE CANADIAN PRESS/Graham HughesThe Canadiens hockey club said in a statement the Lafleur family accepted a national funeral as a way to share its grief with the community out of respect for the public who have supported Lafleur over the years.

The Archbishop of Montreal, Monsignor Christian Lépine, will preside over the funeral, accompanied by Cardinal Gérald Cyprien Lacroix, the Archbishop of Quebec and Primate of the Church of Canada.

Mourners may line the streets in time for the funeral procession to leave the arena at 10:30 a.m., at the corner of De La Montagne and Avenue des Canadiens-de-Montréal streets.

The procession will carry on to Peel St., northwards, and on to René-Lévesque Blvd. to the cathedral. Police will escort the procession, including officers riding horseback.

At the cathedral, there will be space set aside for the public outdoors, with giant screens installed on either side of the building to allow people to watch the proceedings.

The screens will also show the funeral procession as it approaches, for those who will be stationed at the cathedral the whole time.

CF-18s will fly overhead as the funeral procession leaves the cathedral at approximately 12:45 p.m.

Lafleur is survived by his wife, Lise, his sons, Martin and Mark, his mother, Pierrette Lafleur, his granddaughter, Sienna-Rose, and his sisters, Lise, Gisèle, Suzanne and Lucie.

– With files from The Canadian Press