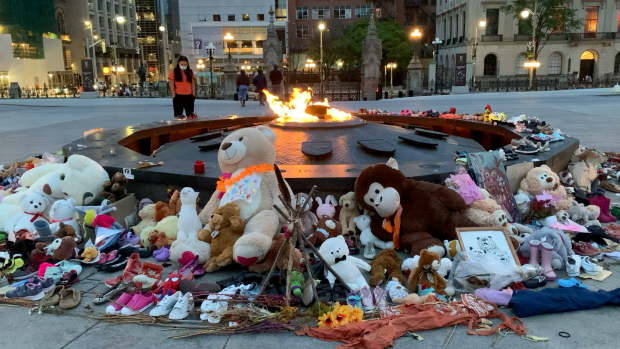 OTTAWA — A memorial continues to grow on Parliament Hill following the discovery of 751 unmarked graves at a former residential school in Saskatchewan.

There are heavy hearts in Ottawa following the discovery of two unmarked graves at residential school sites.

“This isn’t history,” said Jacqueline Shigwadja, whose family members are residential school survivors. “I grew up with it. I see the pain in my community.”

On Thursday, the Cowessess First Nation said it found an estimated 751 unmarked graves on the grounds of the former Marieval Indian Residential School. It comes on the heels of the discovery of 215 Indigenous childrens remains at a former residential school in Kamloops, B.C.

“Intergenerational trauma is more than a definition. It’s a feeling,” said Reeta Koostachin, who was at the Centennial Flame on Parliament Hill, where a memorial honouring Indigenous children lost and buried at residential schools has grown.

“I’m the first generation out who hasn’t experienced violence on this systemic level,” said Cedar Iahtail, who has roots in northern Ontario.

“There’s an ever presence ache in me that comes from that intergenerational trauma,” she said. “So every time I hear on the news, every time I hear what I’ve been told from a very young age it just is triggering.”

Iahtail and her friends spent Thursday afternoon repairing the memorial that includes shoes, stuffed animals and messages after news surfaced it was vandalized on Wednesday.

Ottawa police say just after 9:30 p.m. Wednesday, Parliamentary Protective Services arrested a 54-year-old man who was interfering with the items set up at the Centennial Flame. He has been charged with causing a disturbance.

Before the healing can begin, Iahtail stressed more needs to be done to support Indigenous communities.