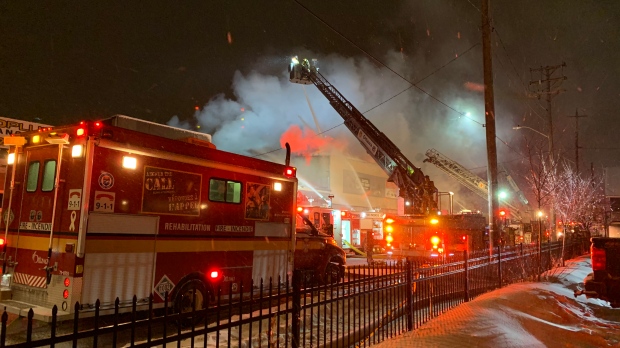 OTTAWA — A raging fire in the heart of Vanier has destroyed a commercial building with multiple businesses inside.

According to Ottawa Fire, an employee at 81 Montreal Road called to report a haze inside the building around 6:45 p.m. Thursday night. When crews arrived on scene, the smoke continued to worsen. A second alarm was declared by firefighters when they found flames burning in multiple parts of the building, including the floors and walls.

A short time later, fire crews had to evacuate after the building started to show signs of collapse. A third alarm was called at that point. Firefighters continued with a defensive attack, trying to save the buildings surrounding the fire.

The blaze was in a two-storey building that houses a pawn shop, an appliance store and a church, just west of the Vanier Parkway.

No injuries have been reported.

Ottawa Fire says heavy equipment was requested to help demolish the building. A fire investigator is on scene trying to determine the cause of the blaze.

Ottawa firefighters have been withdrawn from the building on Montreal Road. This is now a defensive operation. The building houses a pawn shop and appliance store on the ground floorn and church on the second floor. There are no reported injuries. #ottnews #ottcity #ottfire pic.twitter.com/46AfNQm0gt