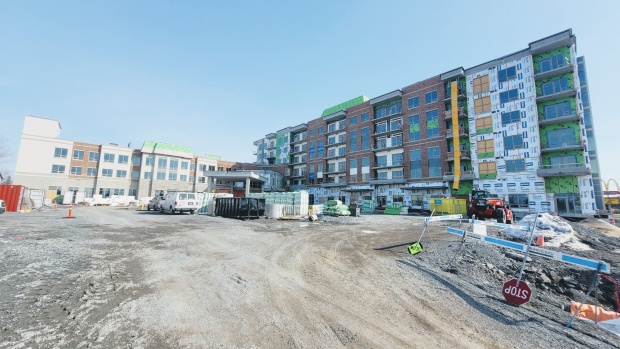 KINGSTON, ONT. — There is a major COVID-19 outbreak linked to a construction site in Kingston.

CTV News Ottawa can confirm that the All Seniors Care job site on Princess Street and Midland Avenue has been closed due to a growing COVID-19 outbreak. The building is set to be the Cataraqui Heights Retirement Residence when it opens.

In a media availability on Tuesday afternoon, Kingston, Frontenac, Lennox & Addington (KFL&A) Public Health said there were more than 30 active cases linked to the construction site, with more expected to come. The outbreak was declared May 2.

There are 110 construction workers directly working on the site, but Dr. Kieran Moore, the region’s medical officer of health said hundreds more could have been exposed, along with their immediate contacts.

“This is a sudden and dramatic increase in cases. This is our largest outbreak to date. There were over 800 tradespersons from multiple different companies that were on that site over the last several weeks and we’re actively investigating that those workers weren’t exposed,” Moore said.

Moore added that the main concern is possible community spread, and that the total number of cases will be spread out as the company had workers come from Toronto, Leeds-Grenville, and Ottawa.

Moore says the investigation has so far found that the construction company, which he did not name, has been following COVID-19 protocols, including wearing masks and contract tracing; however, the Ministry of Labour is expected to be involved and do their own investigation.

Pomerleau Construction is working on the building.

In a statement to CTV News Ottawa, the company said it is working to contain the outbreak.

“Our team was initially informed of the evolving situation on the weekend and immediately informed local and provincial health authorities as required, as well as rapidly informed the subcontractors, our employees, and the client. Our primary concern is to the health and safety of our employees, partners, subtrades, clients, and communities,” the statement said. “We followed the steps set out in our emergency response plan to the pandemic as well as the recommendations of the local Public Health Authority. These steps include voluntary testing for all employees and trade partners on site. All employees who have tested positive and are deemed close contacts of those individuals are in isolation. We are monitoring the situation very closely and are working collaboratively with the local Public Health Authority, our subcontractors, and the client for the health and safety of all employees and workers.”

The construction was deemed essential under the province and has been allowed to continue under the current Ontario stay-at-home order.

The United Brotherhood of Carpenters and Joiners of America Union, which represents construction workers in the region, confirmed the outbreak to CTV News Ottawa.

In a statement, Don Fraser, the local union coordinator says that this shows construction workers need to be prioritized for vaccinations.

“From our perspective, what happened here is a clear example of the risks that construction workers, like all other essential workers, are having to run during this pandemic and we urge the government to make sure that all essential jobsites are as safe as they can be and that vaccines be made available to the workers on these jobsites as quickly as possible,” wrote Fraser. “Local 249 hopes that all of the workers on this site (along with their families and close contacts) are safe and, if they have tested positive, recover quickly and completely.”

KFL&A Public Health says that it has been found to be the B.1.1.7 variant, first identified in the United Kingdom. Moore said that the health unit has notified health partners in the region, to inform them that they should expect a sudden rise in cases in the next two weeks.

“As result of the increasing numbers, we’ve had conversations with the company and they have agreed that it would be prudent to protect their workers by closing the site and quarantining their workers that have tested negative to date,” said Moore.