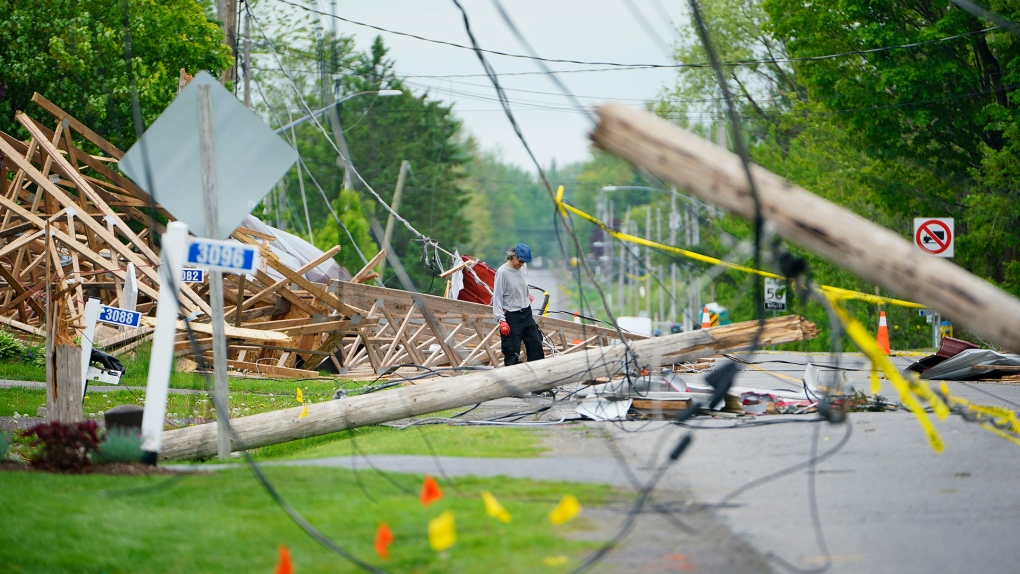 Hydro Ottawa is hoping to restore power to “the bulk” of homes and businesses by tonight, nearly a week after a devastating storm hit the capital with wind gusts of up to 190 km/h.

“We’re still set for the bulk of our customers to be back on this evening,” Hydro Ottawa director of system operations Joseph Muglia told CTV Morning Live.

However, the utility warns there is “significant work” to do in Parkwood Hills, a portion of Anderson Road and Bells Corners that will slow down restoration efforts.

As of Friday morning, 33,000 Hydro Ottawa customers remain without power in all neighbourhoods of the city. Since the storm hit last Saturday afternoon, hydro crews have restored power to 149,000 customers.

“We’ll continue to work throughout the evening, 24/7 until everyone’s brought back,” Muglia said.

Muglia does not expect the rain in the forecast today to slow down restoration efforts.

“Our crews and all of the extended resources that we’ve had to help us with this are more than capable than working in adverse weather conditions,” Muglia said. “The rain usually doesn’t slow us down, it would have to heavy rain and in particular heavy winds, but our folks are trained.”

Crews from Toronto, Kingston, Cornwall and London have been working with Hydro Ottawa to repair the damage and restore power.

In a letter to council late Thursday evening, Hydro Ottawa president and CEO Bryce Conrad said the “level of damage is greater than we previously anticipated”, which could slow down restoration efforts.

“Owing to the level of damage and the impending weather expected (Friday), there may be some communities where we are not able to meet that timeline,” Conrad wrote. “Moreover, within communities that are re-energized, there will be some pockets of customers that are still off, as a result of additional damage to that circuit, tree contacts or other debris.”

“We’re sort of converging on some of these neighbourhoods that need a little bit of extra care, extra resources just because of the damage, because of the large amount of brush and trees that were on the infrastructure,” Conrad said.

Coun. Keith Egli said he followed up with Hydro Ottawa to find out about the damage in Parkwood Hills.

“Unfortunately it means Parkwood Hills, General Burns and Fisher Heights. The communities will not be getting power today,” Egli said on Twitter.

Conrad cautions that there will still be pockets of neighbourhood without power once the “bulk of our power system” is energized.

“The bulk of our power system is the key phrase … think of it like our own road network. We’ll have the large arterial roads open for power and we’ll have power running to most, if not all of our communities,” Conrad said.

“But we’ll have roads and cul-de-sac here and there where the power is interrupted because of trees or damage to conductors or other debris.”

Hydro Ottawa was able to energize a “large number” of circuits on Thursday, according to Conrad. The areas include:

Across eastern Ontario, 12,263 Hydro One customers remained without power as of Thursday evening.

Hydro Quebec says 7,988 customers remain without power in the Outaouais.

Some Ottawa schools will be closed for a fourth day due to a lack of power at the buildings.

The Ottawa Student Transportation Authority is advising parents, guardians and students to check school bus plans before heading out the door.

“Just because the level of the damage that area has sustained,” Gonthier said.

The city says public works staff will be focusing on removing branches, trees and debris across the city.

PRICE TAG FOR THE STORM

The city of Ottawa and Hydro Ottawa both say it’s too soon to say how much the storm will cost.

City Manager Steve Kanellakos says the city is tracking all costs, but it’s “way too early” to capture all the overtime costs for city staff, police and emergency crews.

Mayor Jim Watson said earlier this week Premier Doug Ford promised the city that the Ontario government will cover the cost of the storm.

The city of Ottawa says bins will remain in place for organics-only waste at 15 locations until Saturday.

The green bin blitz will wrap up on Saturday as well.

The city estimates 33 tonnes of organic waste has been collected during the green bin “blitz” in neighbourhoods this week.