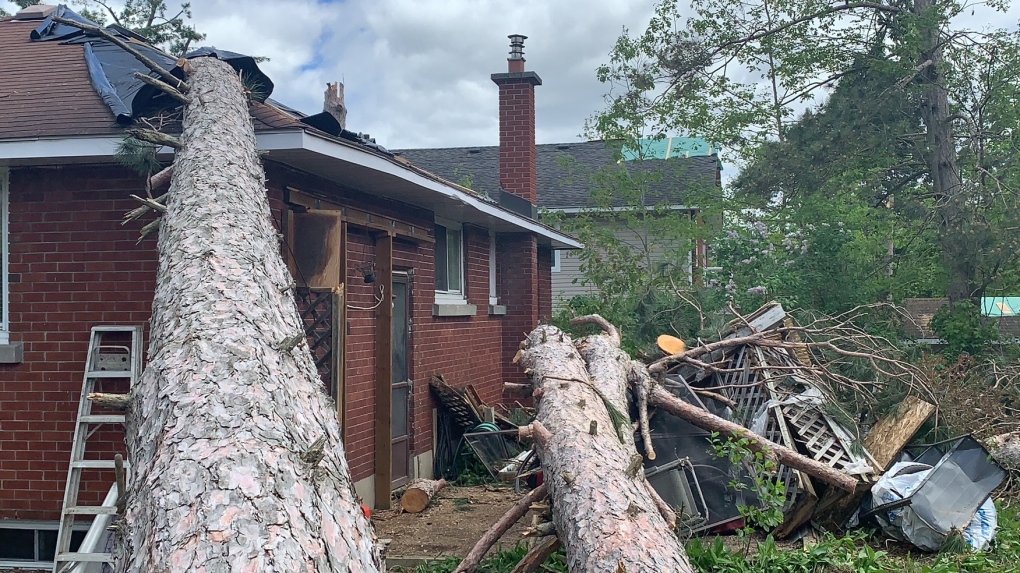 Hydro Ottawa is entering the “last phase” of restoring power to homes and businesses following a devastating storm over a week ago, with the goal to have the grid back online by tonight.

As of Sunday morning, 11,000 customers remain without power across the city. Hydro Ottawa says since the storm hit on May 21, more than 90 per cent of the 180,000 customers impacted by the storm have had their power restored.

Hydro Ottawa says crews are placing a “heavy emphasis in those areas that were hardest hit”, and the goal is to restore the “bulk energy system” as quickly as possible.

“We are close and with another day of heavy work, we believe that we will have power running to all circuits in the distribution system tomorrow night,” said a memo to council from Hydro Ottawa Saturday night.

“Please understand, this is by no means a sure thing nor does it imply that everyone will have power. As I have stated from the outset, there are plenty of pockets with heavy damage that will preclude or inhibit energization.”

Hydro Ottawa provided an outline to councillors Saturday on the largest 13 remaining outages by customer count.

“The next part of the restoration is complex as a result of remaining debris, fallen trees and branches and/or damage to customer-owned equipment,” Hydro Ottawa said in a statement Saturday afternoon.

“If customers notice their electrical equipment (such as service masts, meterbase, or wires running from the meterbase into the electrical panel within the house) has been damaged, they may need to make repairs to their owned equipment before Hydro Ottawa is able to reconnect power.”

Hydro Ottawa says as crews finish the large construction projects, they will be broken down and assigned to smaller teams to cover smaller pockets were power is still off.

CTVNewsOttawa’s Natalie van Rooy asked Hydro Ottawa on Saturday if power could be restored by the end of the weekend.

Muglia says Hydro Ottawa is “hoping to have the bulk supply” back by the end of the weekend, which would be electricity feeding into neighbourhoods.

“We are spread out across the city … we are focusing on those areas that need the little bit of extra attention.”

Hydro crews from New Brunswick, London, Ont., Toronto and Kingston remain in Ottawa to assist with the cleanup.

“Obviously, those 18,000 that still don’t have power are frustrated, as they should be. But we are making progress,” Watson told CTV News Saturday evening.

“WE HAVE NOT FORGOTTEN YOU,” HYDRO OTTAWA SAYS

Frustration has been building across Ottawa this weekend, as residents spend a second weekend without power following the May 21 storm.

Muglia insists Hydro Ottawa will continue to work 24/7 until the entire grid is restored.

“We are hoping that the residents can bear with us a bit longer,” Muglia said.

“This was such a widespread hit to our city. There’s a tremendous amount of trees on wires and broken poles that we are still dealing with.”

Muglia adds Hydro Ottawa has not forgotten the 18,000 customers still without power.

“We are aware of every feeder that has disruption to it. Even though you may see a street over from you, a street that has power and you don’t – rest assured, we have not forgotten anybody.”

The Ottawa Carleton District School Board and Ottawa Catholic School Board say schools will open for in-person learning on Monday if they have power.

Schools will open on Monday if power has been restored to the building by 3 p.m. Sunday.

All organics only waste bins have been removed from the 15 sites across the city.

For information on waste disposal options, visit the city of Ottawa’s website.

The city of Ottawa launched a new neighbourhood cleanup program, called “Cleaning the Capital: After the Storm.”

Much like the annual Cleaning the Captial Program, neighbours, families and friends can work together to cleanup their neighbourhood following the storm. Residents are asked to complete the electronic registration form for the “Cleaning the Capital” program.

Supplies will be available for pickup as of Saturday, between 10 a.m. and 10 p.m., at the following locations:

The city is also in partnership with Samaritan’s Purse, a non-government organization, and will provide support to residents who have been impacted on their private property. For more information, visit samaritanspurse.ca/ottawavolunteer.

Volunteers are asked to bring the following:

Please do not bring your own equipment or tools to a Samaritan’s Purse project.