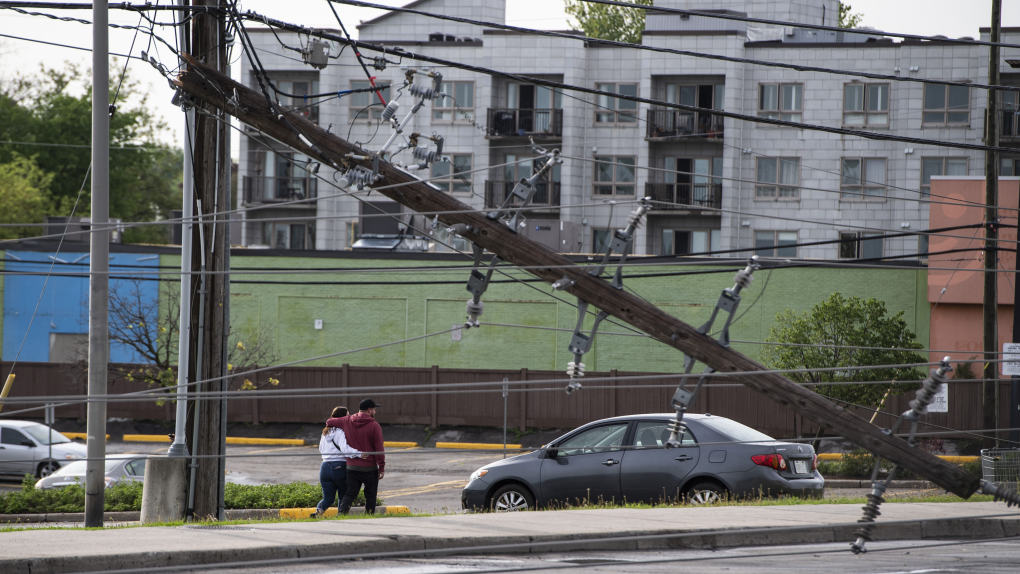 Hydro Ottawa is not committing to a new deadline to restore power to thousands of customers, one week after a devastating storm with wind gusts of 190 km/h hit Ottawa.

As of Saturday morning, 19,000 homes and businesses remained without power. Since the storm hit last Saturday, power has been restored to more than 161,000 Hydro Ottawa customers. About 7,000 more customers had power restored overnight.

Hydro Ottawa initially promised to restore power to “the bulk” of the grid by Friday evening, but rainy conditions Thursday and Friday and the extent of the damage and debris in some areas slowed down recovery efforts.

Conrad says crews from across the province remain in Ottawa to assist Hydro Ottawa crews in repairing the damage and restoring electricity.

“The only commitment I can make is the crews will be there working around the clock until such time as it’s restored,” Conrad said Friday afternoon. “A couple more days of good hard work, hopefully we can get there.”

Hydro crews are focusing on the following areas on Saturday

“Our forces that are here, that are on loan from other utilities and our contractors, they’re not going anywhere,” said Director of Systems Operations Joseph Muglia on Newstalk 580 CFRA’s CFRA Live with Andrew Pinsent. “They’re staying here. We’re making sure that we’re getting these areas back on before anybody leaves.”

In a memo to councillors Friday night, Conrad said, “the amount of damage to our infrastructure as well as the inclement weather (Friday) morning did negatively impact our restoration efforts.”

A post on Hydro Ottawa’s website Saturday morning said, “today’s weather is impeding our progress” but that “crews are continuing restoration efforts.”

Environment Canada says 16.2 mm of rain fell at the Ottawa Airport on Friday. Some scattered showers also continued Saturday morning, but conditions should improve by the afternoon.

Conrad says upon further inspection and following six days of work, crews have confirmed approximately 400 hydro poles were damaged during the storm.

“From a construction perspective, we have done nearly a year’s worth of construction in the past six days,” Conrad said.

“While that is of small consolation to the customers that remain without power, it is nonetheless evidence of our commitment to a fully re-energized community.”

During the tornadoes in 2018, 80 Hydro Ottawa poles were damaged.

Hydro Ottawa still has over “150 events” to be managed and completed, according to Conrad.

“We have a list of over 1,500 known or reported tree contacts/tree interference which needs to be addressed and resolved. And as we do additional restoration work, these numbers have the potential to increase,” Conrad said.

“The good news is that we have all of the resources – both forestry and utility crews – that we need to restore power as quickly as we can.”

The city of Ottawa is launching a new neighbourhood cleanup program, called “Cleaning the Capital: After the Storm.”

Much like the annual Cleaning the Captial Program, neighbours, families and friends can work together to cleanup their neighbourhood following the storm. Residents are asked to complete the electronic registration form for the “Cleaning the Capital” program.

Supplies will be available for pickup as of Saturday, between 10 a.m. and 10 p.m., at the following locations:

The city is also in partnership with Samaritan’s Purse, a non-government organization, and will provide support to residents who have been impacted on their private property. To inquire about projects that can use your specialized skills, volunteers are asked to contact Samaritan’s Purse at 1-844-547-2663 or samaritanspurse.ca/ottawavolunteer (service in English only).

Volunteers are asked to bring the following:

Please do not bring your own equipment or tools to a Samaritan’s Purse project.

The city of Ottawa says the cleanup of downed trees, brush and debris is “one of our most significant focus” for crews this weekend.

Over 700 public works employees have been deployed to focus on the cleanup.

Public Works General Manager Alain Gonthier admits there is “a lot of work” to be done.

“It’s going to take us a number of weeks to be able to get through it all,” Gonthier said. “But we’re going to be continuing the work until we have it all cleared out.”

Gonthier says the city has been categorized into three levels based on the amount of debris.

Level One areas are areas where the debris cleanup can be addressed through weekly pickup, while Level Two will be areas that require “additional capacity” to cleanup waste. Gonthier says Level Three requires specialized equipment for some neighbourhoods, including the Pineglen neighbourhood.

“Where we’ve had to bring in large, specialized equipment to be able to move more material within the community,” Gonthier said, adding it will take weeks to cleanup the storm.

Today will be the last day large bins will be set up at 15 locations for organic waste, and the city is wrapping up the “Green Bin Blitz” to collect rotten and spoiled food at homes.

Gonthier says 43 tonnes of organic waste has been collected from homes this week.

The locations for the giant bins to collect organic-waste are: