Voters in Ottawa and eastern Ontario head to the polls today to cast their ballot in the 43rd Ontario election.

Doug Ford and the Progressive Conservative Party are seeking a second majority mandate after winning the 2018 election.

In Ottawa, the Progressive Conservatives held four of the eight seats at the dissolution of the legislature, compared to three seats for the Liberals and one for the NDP.

In eastern Ontario, the Progressive Conservatives held four seats, the Liberals and NDP each held one seat and one seat was held by Independent MPP Randy Hillier, who is not seeking re-election.

CTVNewsOttawa.ca looks at what you need to know to vote in today’s Ontario election.

There are eight ridings in Ottawa.

To see who is running in each riding, click here. You can also find information on the Elections Ontario website.

Polling stations in Ottawa and across Ontario will be open from 9 a.m. to 9 p.m.

WHO IS ELIGIBLE TO VOTE?

You must be 18 years of age or older on election day to vote in Ontario. You must also be a Canadian citizen and a resident of Ontario.

WHAT IDENTIFICATION DO I NEED TO VOTE?

If you have a voter information card, you will need one piece of identification with your name on it.

If you don’t have a voter information card, you will need to bring one piece of identification that displays both your name and your current address. 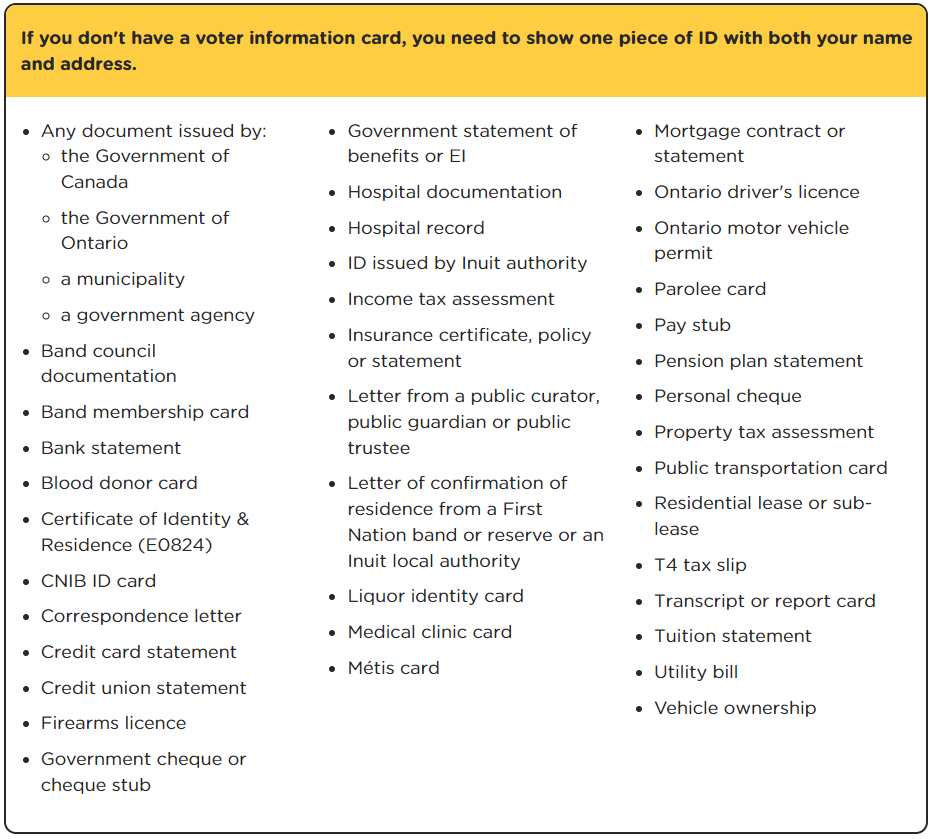 WHERE DO I VOTE?

Elections Ontario says you can vote in person at the voting location assigned to you based on your current residential address.

To find the specific voting location, you can use Elections Ontario’s voter information service.

WHAT HAPPENS AT THE POLLING STATION?

Here is the voting process on Election Day, according to Elections Ontario:

The polling station at St. Monica School on Merivale Road is being moved because of damage from the storm.

Elections Ontario says all electors whose voter identification card assigned them to Poll Number 20 should now vote to the Metropolitan Bible Church at 2176 Prince of Wales Drive.

Initial results are expected to roll in shortly after the polls close at 9 p.m.