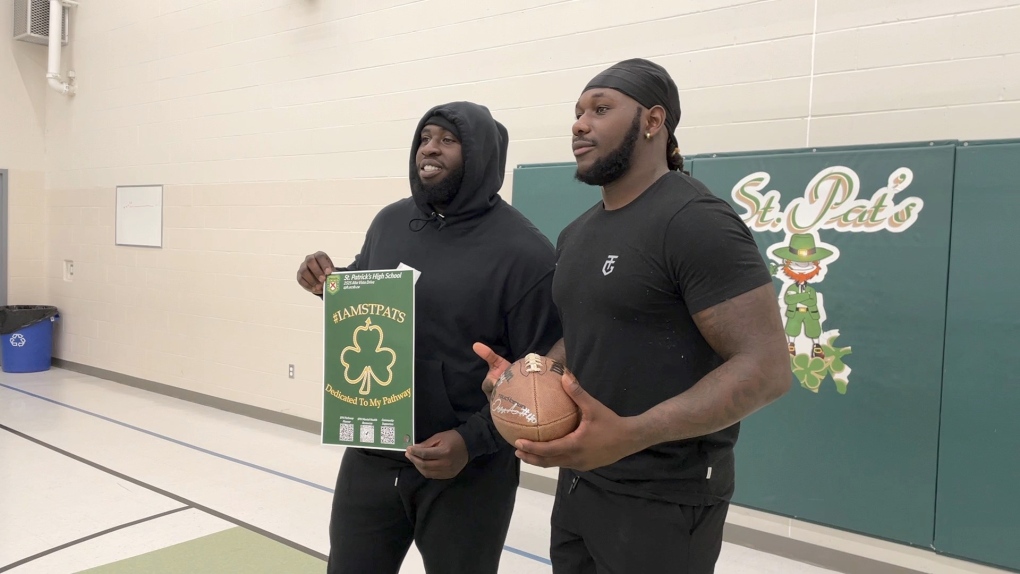 Two of Ottawa’s football heroes who made it big south of the border spoke about their neighbourhood roots.

They went back to St. Patrick’s High School, where their football careers all started.

Jesse Luketa grew up in the Herongate neighbourhood. His passion for football landed him on the field as a linebacker at Penn State.

“This is where it all started. I was once them. Standing in their shoes, sitting in the same seats, wearing the uniform, walking the halls. So it’s big,” says Luketa. “I just want to come back here and be a source of motivation for the kids, for the next generation and show them that I did it. What’s to say you guys can’t do it as well.”

This weekend Luketa could hear his name called in the NFL Draft, that would be the second St. Pats student to make it to the NFL.

“My love ones. My family. My friends. The people who I stared with. That’s ultimately what I’m looking forward to. Enjoying that special moment with everybody who’s been there since day one,” says Luketa.

Neville Gallimore now plays for the Dallas Cowboys, one of the richest and most celebrated sports teams in the world. Gallimore is somewhat of a mentor to Luketa.

“He’s a kid that has a whole bunch of love for the city, just like myself,” says Gallimore. “So he understands that it’s not about him. It’s bigger than himself.”

Gallimore was drafted in 2020.

“It was a funny feeling, a unique feeling,” says Gallimore. “Just because you have no idea who you’re about to get drafted to. You never know what these coaches are saying. But then when you finally get your name called it’s like a dream come true.”

Staff at St. Pat’s know how much it means to the kids to be able to see what it takes to go pro, and have the chance to talk to these football stars.

“It means a lot,” says St. Pat’s basketball coach Patrick McKinnon who also teaches physical education at the school. “It basically sets them up for goal setting. And it gives them a blueprint of basically how to succeed in sports, for sure.”

“Whichever team he goes to, he’s going to make a big change in that program for the better,” says Gallimore. “He’s got the whole city behind him. We’re all proud of him and we can’t wait to see where he goes.”

Both of these athletes coming back to where it all started, to help the next generation reach their goals.

“The biggest thing I want them to take from my story is, no dream is too far or unattainable,” says Luketa. “Don’t ever let someone tell you that you can’t do something. If you truly want something, you’ve got to work at it.”