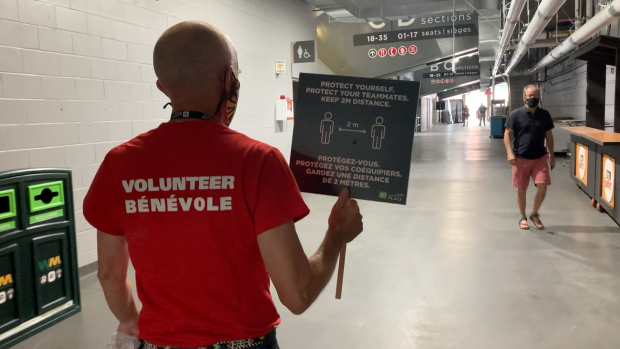 OTTAWA — Ottawa Redblacks fans sporting red and black made their way inside TD Place for the first time since 2019.

“Happy faces but I can’t see many of them because they’re wearing masks but happy to see everyone playing it safe today,” said volunteer, Tom Lawson.

For the Redblacks, still in training camp, it was a chance for players to perform in front of a crowd.

“We’re excited to be back,” said season ticket holder Lily Nicholas. The young fan came with her parents to TD Place from Braeside to see the team scrimmage ahead of the start of the CFL season.

“It’s been a long time since we heard the crowd and the whistles going,” she said.

Fans were all seated on the north-side of the field, a different view for Chris Goldwin whose seats are on the south-side. But that didn’t matter.

“It’s like we are getting closer to normal,” he said. “Just to be around people, to watch these guys here, we have a lot of new players, a new coach. Really looking forward to that season opener.”

A shortened CFL season kicks off next month. The Redblacks will head west to play the newly named Edmonton Elks on Aug. 7.

The Redblacks will play in front of home fans for the first time in nearly 22 months when they welcome the BC Lions on Aug. 28.With Ontario’s current health measures, the maximum capacity is set for 15,000 fans in the stands at TD Place.

Additional protocols are already in place. Volunteers walked around the stadium reminding fans to keep 2 metres apart and wear masks when they’re not in their seats.

“Hopefully after a few weeks time the province will open a little bit more, we will able to welcome back a full house,” said Lawson.

Just after 1 p.m., the scrimmage was over. Fans already on their feet cheering with players turning to the north side to acknowledge the crowd.

Everyone looking forward to the next time they’ll be in the stands.