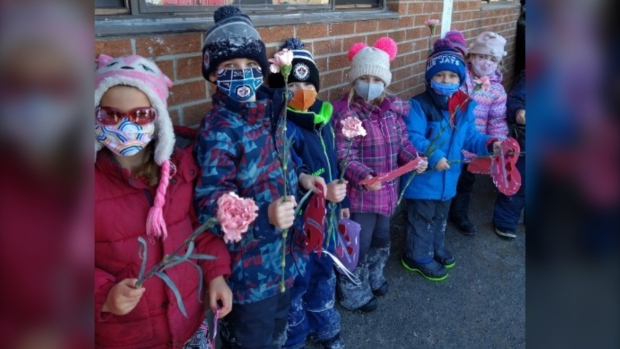 KINGSTON, ONT. — Seniors in the Kingston region got an unexpected surprise on Valentine’s Day when they received hand-made cards from an Amherstview kindergarten class.

The class made more than 2,000 cards for residents of long-term care homes in both Kingston and nearby Amherstview, Ont., in just over a week.

Teacher Julie Bell said they first set out to make cards for a nearby home, but then decided to do go further.

“I underestimated a little bit how many that would be,” she laughed. “I thought maybe we’d need a thousand but, in all, we needed two thousand valentines for every resident.”

Bell says she was inspired by a similar gesture made in Gananoque earlier this year.

Five-year-old Sophia Raffael said she wanted to make one “because everyone deserves a card.”

Six-year-old classmate Edison Wilson agreed, and said he wanted to put a smile on people’s faces “because then they know that everyone loves them.”

Bell gave the kids stickers and paper to create their own individual cards.

They also had printed-out words to glue onto the cards, like “Happy Valentine’s Day” and “made with love from a kindergarten student.”

“Every time we completed a valentine, I’d literally say, ‘That’s another smile. That’s another person that we’ve made an impact on’,” said Bell.

Some of the cards were delivered to the Windsor Retirement Residence in Amherstview last week and handed out by staff Sunday morning as a surprise.

Residents tell CTV News Ottawa the pandemic has been difficult.

“We have grandchildren and they cannot come in. Even our own children, our own kids cannot come in,” explains Len Hessels. “(The cards were) lovely.”

Fred Granger wasn’t really surprised when he was told how many cards the children had made.

“It’s typical of these marvellous children from the school,” he said. “We hope they keep it up.”

Bell said many children at the school were inspired to contribute, with students in every grade willing to make one too.

Even Bell’s daughter contributed and made 300 cards at home.

Bell said she hoped the children would spread the love as they grow.

“I hope it inspires them to want to continue to do acts of kindness throughout their lives because it’s part of who they are.”