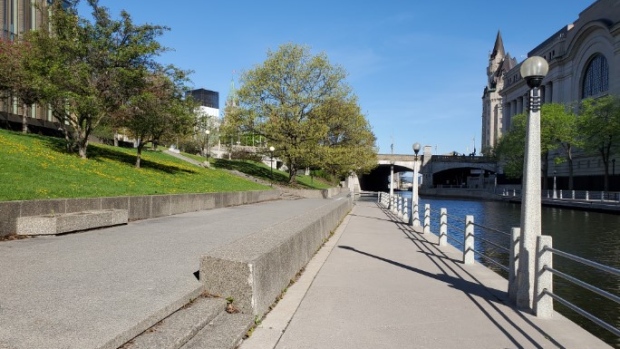 OTTAWA — The heat arrived in Ottawa this week, but not the humidity.

“It was almost desert-like air in the Ottawa Valley,” says David Phillips, Environment Canada senior climatologist during an interview with Newstalk 580 CFRA’s The Morning Rush with Bill Carroll.

According to YOW Weather on Twitter, 5 p.m. on Thursday was the driest hour in Ottawa since records began in 1952. The humidity at 5 p.m. was 12 per cent.

Phillips says Calgary would typically see a humidity level of 12 per cent during the summer because they have warm, but dry air.

So, why did Ottawa see dry weather?

“If you look back over the last few days, and you can understand why the air was so dry,” Phillips said Friday morning.

“It hasn’t rained in six days and in 18 days it’s only rained on two occasions, so it’s been very bone dry. The snow has been long gone, even the lake waters, the river waters are running cold so they’re not evaporating into the air.”

Phillips says Ottawa is under a “high dome” – a high-pressure area.

“The air there is sinking, it doesn’t rise it sinks. It is sunny, it is generally very little cloud, and the air is sinking and as it is sinking, it is actually warming up. It is evaporating every bead of moisture that’s in the ground, and there isn’t a lot.”

Phillips says Ottawa enjoyed temperatures of 24C on Thursday, with no moisture in the air.

“It was almost desert like air in the Ottawa Valley.”

Ottawa is expected to enjoy another dry day on Friday, with Phillips saying the humidity will drop to 11-12 per cent again in the afternoon.

Environment Canada started archiving the data for humidity in 1952.

Phillips says humidity was previously measured using a hair hygrometer, but now Environment Canada and other agencies use electronic ways to precisely measure the humidity.

With rain in the forecast next week, Phillips says humid weather will return to Ottawa for the final week of May.