Nicole Van De Wolfshaar hear quite a racket from the crows in her back yard Saturday morning. But looking out at the pool, she saw something unusual.

“I was pretty sure I was going to have to add ‘drowned coyote’ to my list of things to deal with,” she wrote on her neighbourhood Facebook page, sharing images of a coyote swimming in the pool. “He eventually got out safely.”

Van De Wolfshaar tells Newstalk 580 CFRA’s CFRA Live with Andrew Pinsent that she was getting some water to make coffee on her barbecue—her power was still out from the storm a week prior—when she heard the noise from the local birds.

“When there’s a predator in the neighbourhood, the crows start making quite a racket to alert other animals,” she said. “We do often see foxes in our back yard, so I came out to have a look to see the fox and I couldn’t see it anywhere. Then I came over closer to the pool and that’s when I saw the coyote.”

She doesn’t know whether the coyote fell in or just wanted to go for a swim, but she said she was concerned it could be trapped.

“It was maybe the wrong reaction but I felt worried. I wanted to help him out. I looking around the yard to find something that I could use to fish him out of the pool because he really didn’t look like he was going to make it out,” she said. “He looked exhausted. I don’t know how long he was in the pool before I spotted him.” 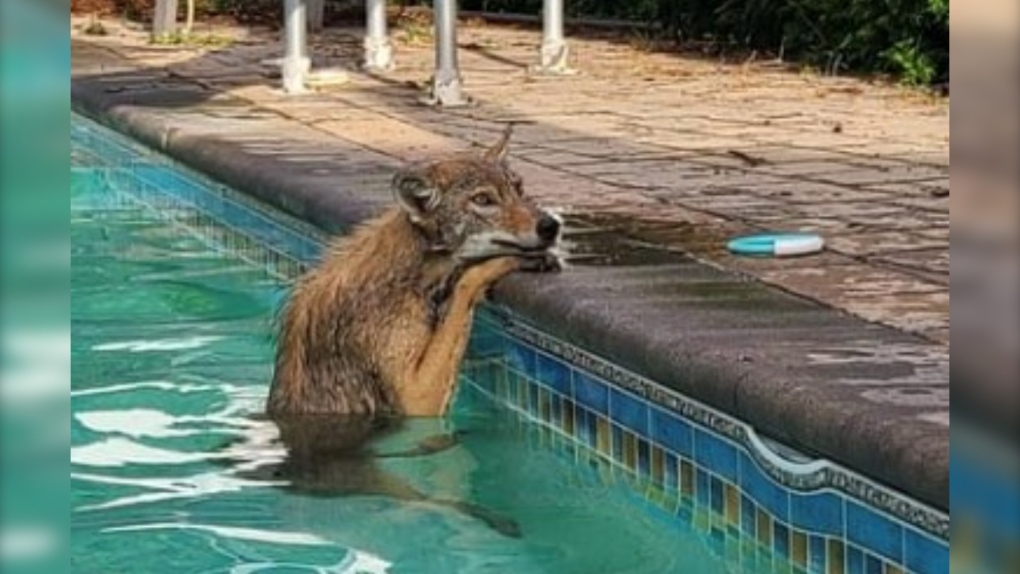 Van De Wolfshaar said she’d heard from neighbours that coyotes are sometimes seen in her area in Glabar Park.

The coyote was eventually able to get out of the pool. Van De Wolfshaar also got her power back Saturday night.

Between the storm last Saturday, the weeklong power outage, and a visit from a coyote, Van De Wolfshaar said this was, “about the craziest week I’ve had since I moved here.”

Coyote sightings are not uncommon in Ottawa. City staff say they get about 300 calls a year about them, mostly for the same animal or for coyotes that have been killed by vehicles. There have been reports of attacks in recent years as well.

While this coyote seemed only interested in taking a dip, Ottawa Police and Ottawa Bylaw have the following tips if you encounter aggressive wild animals: