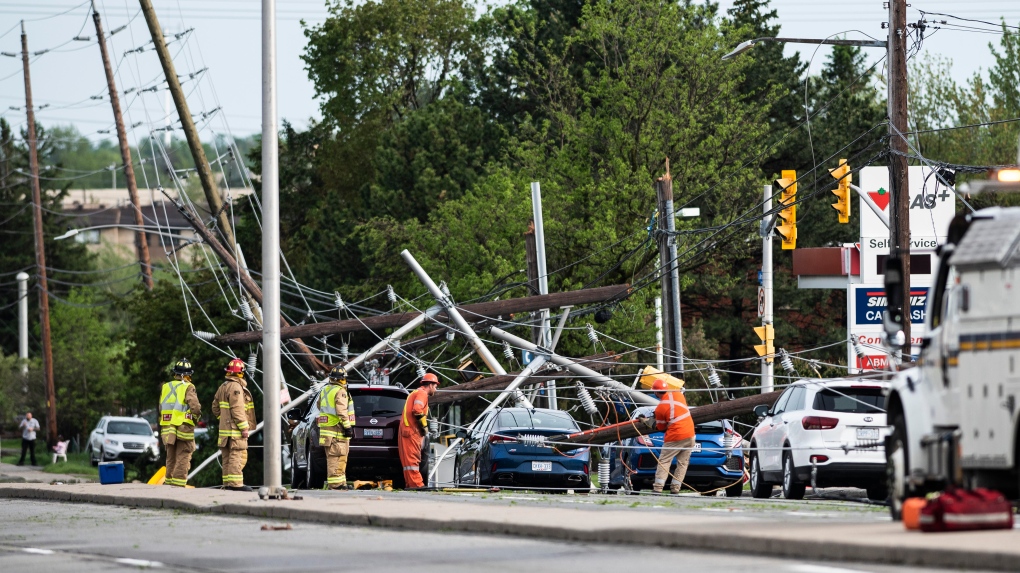 About 45,000 Ottawa customers were without power as of 9 a.m. Thursday morning, down from 53,000 Wednesday evening.

“Crews are working in some of the most-impacted areas of the city today, including Merivale, Woodroffe, Greenbank, Pineglen, Overbrook and Elmvale Acres,” Hydro Ottawa said on Twitter Thursday morning. “While we don’t have restoration times, we are hopeful to have the bulk of the system up by end of day Friday.”

City officials are holding a briefing at 2 p.m. Thursday on the storm recovery efforts. You can watch it here.

City crews continue to restore traffic lights and remove debris from parks and streets. Hydro Ottawa is asking customers for patience while they work to restore power.

“Hydro Ottawa acknowledges that customers who’ve been without power for the last five days are struggling and ask for continued patience for a little longer,” Hydro Ottawa said in a statement Wednesday evening.

“The magnitude of infrastructure replacement of this size would commonly require six months to perform, but the utility and its partners are performing it in a matter of days. The utility promises that restoration efforts will continue 24/7 until all residents are reconnected.”

“We’re there, we’re getting that work done – we’ll be there all day and all night and hopefully, with a bit of luck, we’ll be able to energize that line,” Conrad said, adding the goal is to get the lines working today.

“When we pick those lines up and those poles, the expectation is that it’s probably another 15-20,000 customers that will likely come back onto the grid. Again, there may be some damage to individual houses along the way.”

Hydro Ottawa is hoping to restore power to most of Ottawa by Friday night.

Hydro crews from London and Cornwall are expected to arrive in Ottawa today to assist with the restoration efforts.

In a letter to city council last night, Conrad said the rain in the forecast could slow down crews’ efforts to restore power.

“The weather, as currently predicted in the forecast, could impact our restoration efforts if there is severe wind, rain or thunderstorms,” he said. “We ask residents to remain patient.”

Hydro One warns residents in Bancroft, Perth and Tweed regions could be without power “for several days” as repairs continue.

As of Thursday morning, 18,000 Hydro One customers in eastern Ontario remained without power.

The number of customers in Quebec without power has fallen below 50,000, Hydro-Quebec said Thursday morning.

Nearly half of the outages that persist affect 10 customers or fewer.

Fifty schools across the city of Ottawa remain closed today due to power outages.

The city of Ottawa and Ottawa police are asking motorists to keep their travel to “essential travel” only as crews continue the cleanup from the storm.

Seventy-five intersections still have no power, and a “number of roads” are closed because of downed hydro lines and trees.

“Really try to keep your travel, especially in the impacted areas, to essential travel only, otherwise this is significantly impacting both our cleanup efforts and also hydro’s work,” said Alain Gonthier, Public Works General Manager.

Over 120 intersections have been repaired following the storm.

The city of Ottawa says Emergency Reception Centres will be open from 10 a.m. to 10 p.m.

The following facility offers power for charging devices and washrooms:

WHAT TO DO WITH YOUR DEBRIS?

The city of Ottawa is offering tips to dispose of your waste as the cleanup continues from Saturday’s storm.

You can put your household waste at the curb as part of your regular garbage and recycling collection.

Organic waste can be placed in your green bin, which is picked up weekly.  The city of Ottawa is carrying out a “green bin blitz” in the neighbourhoods hardest hit by the storm to ensure organic waste is collected as soon as possible. Visit ottawa.ca for more information.

HERE’S WHAT TO DO WITH STORM-RELATED WASTE

The city asks residents to separate storm-related waste from any trees or branches when you put them out at the curb.

The city’s landfill at the Trail Waste Facility on Trail Road is offering extended hours to accommodate special collections and will waive tipping fees for residents with storm-related materials.

Logs, large tree limbs and pressure-treated wood can be placed at the curb for collection.