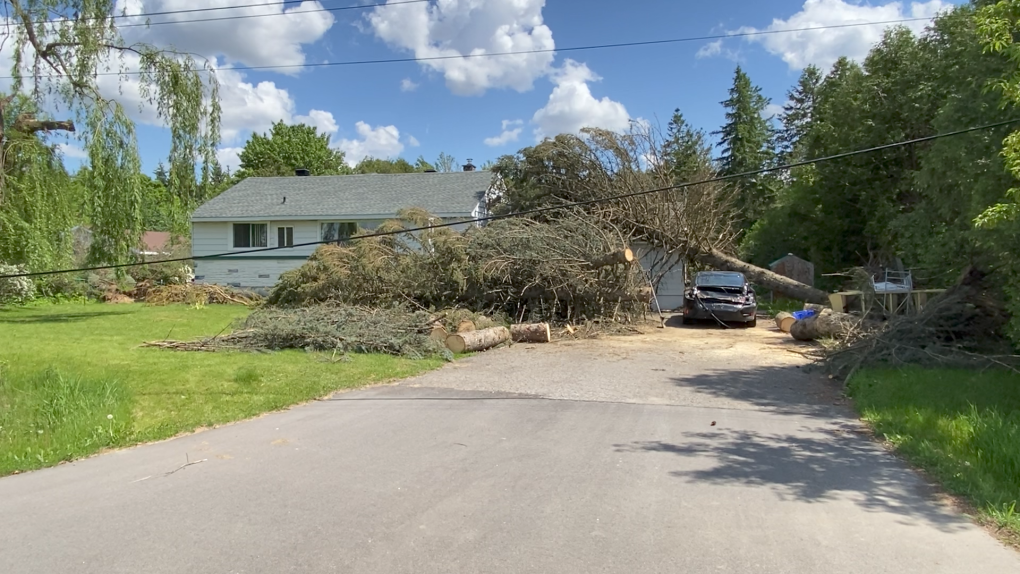 Hydro Ottawa is targeting the hardest hit areas of the nation’s capital to restore power after the May 21 deadly storm.

As of Sunday afternoon, around 9,900 customers are still in the dark.

In the small community of Carlsbad Springs, east of Ottawa, an empty field is what’s left of a forest.

“Trees started falling, some 90 foot trees here behind me all came down,” said Vince Giroux, whose property was damaged. “Big maples and oaks, all came down.”

Homeowner Vince Giroux says his family has a sugar bush on the property. The damage to the trees is extensive.

“We make quite a bit of maple syrups, it’s quite a banner year in Carlsbad Springs,” he said. “We had some trees 150 and 125 years old come down, some of our best producing maples and you can’t put a dollar value on those.”

At one point his road was completely cut off because of trees that fell onto the roadway.

“We used our tractor here to get it opened up and it took quite a bit of time,” said Giroux.

Hydro crews have been working around the clock to restore power.

“We have approximately 11,000 customers without power across the province,” said Richard Francel, a Hydro One spokesperson.

The destruction is still everywhere.

In Carlsbad Springs, trees are on top of houses and cars are crushed by debris on day nine of the storm clean-up.

Thousands in the core of the nation’s capital are also in the dark.

Rodney Williamson is on day nine of no power. He’s getting by the best he can and is trying to keep his spirits up.

“You don’t feel like doing anything else except trying to live through the disaster,” said Williamson. “It’s draining.”

He bought a barbecue during the outage to make breakfast, but is still eating dinners and lunches out.

“We cannot afford to go out and have meals outside of the home everyday,” said Irene Fonte, Rodney’s wife.

Meanwhile, the Pavilion Food Bank in South Keys got power back Sunday morning, but not before they lost all of the food in their fridges and freezers.

“Ten thousand dollars worth of food, easily,” said Sandra Bruff, who volunteers for the food bank. “It was just a heartbreak.”

A heartbreaking loss, but with the support of the community, they’re determined to bounce back from the storm.