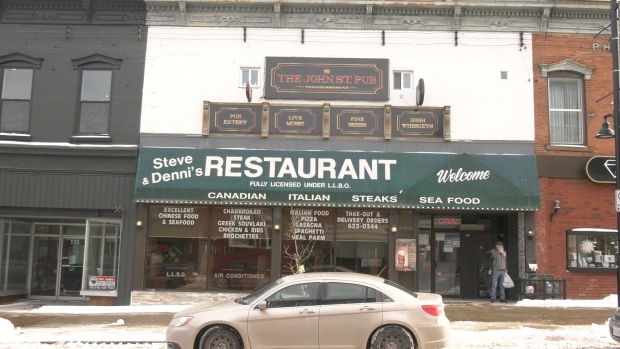 ARNPRIOR — A staple in the town of Arnprior is set to close, but it’s not due to the COVID-19 pandemic.

Owners Dennis and Sofia Xidous of Steve and Denni’s Restaurant are in their 70’s now and set to retire. The building has been put up for sale and isn’t expected to be on the market for long.

“I know my parents were also really looking forward to their retirement,” says son Nick Xidous.  “They’ve been in the restaurant business since 1975. Their first restaurant was in Kemptville, they were the original owners of the Kemptville Restaurant.”

Nick and his brother Jimmy Xidous say they grew up in the restaurant, and celebrated many firsts and holidays there. But the brothers say they won’t be carrying on the family business, instead branching out on their own venture.

“Right now we can’t devote 100 percent, my siblings and I,” says Nick. “I mean, it’s time for our parents to retire, but our commitment is going to be Era Cannabis (in Kemptville). It’s going to be a cultivating and processing facility.”

The restaurant is listed along with the upstairs nightclub and live music set up for $649,900. Listing agent Dominique Michaud says there’s been huge interest in the commercial property despite the pandemic.

“We’ve actually had so much interest since the beginning of the year, it’s actually quite overwhelming,” says Michaud. “There’s at least a dozen serious potential buyers looking at it.”

Whether the business remains a restaurant or gets renovated remains to be seen. Michaud says there is some interest from buyers to continue the restaurant, but there is also opportunity for a transformation of the upstairs nightclub into a retail space or apartments.

“(The possibilities are) things I feel the town will be very excited about,” says Michaud.

“Hopefully the new owners who take it over keep it as a restaurant and keep some of the classics,” says Jimmy Xidous. “That’s some of what the customers were enquiring about.”

One of those customers being Jeannie Pearman, who says she’s been coming to Steve and Denni’s for lunch for the past 20 years.

“I love the food, the food and the people,” Pearman said when asked why she comes every day. The loyal customer says she is disappointed hearing the news the restaurant is closing, but accepts that it’s time for the family to retire.

“Hope somebody that buys it appreciates it as much and treats it as well as they did.”

“There’s not too many businesses that you’ve seen that have been around for nearly 35 years,” says Nick Xidous. “We definitely want to thank the community, I mean this is one of the best communities around. Everybody is amazing in Arnprior.”