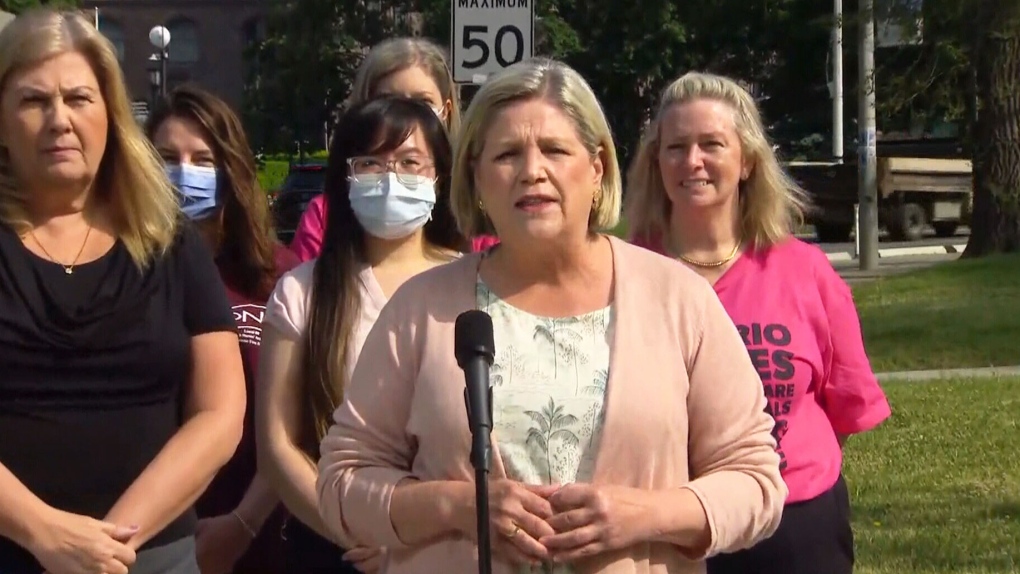 NDP leader Andrea Horwath is in the riding of Ottawa West—Nepean Monday as the provincial election campaign reaches the home stretch. You can watch the announcement live on this page.

Horwath is ending her day in Ottawa, making an announcement at Beachconers ice cream shop near Britannia Beach.

NDP candidate Chandra Pasma lost the riding in 2018 by fewer than 200 votes, and is running again against PC candidate Jeremy Roberts.

Her visit comes hours after Ontario PC leader Doug Ford visitted the capital to announce a plan to expand Highway 417; however, he was grilled on his actions throughout the aftermath of the May 21 storm in Ottawa.

Ford says he was on the phone “every single day” making sure Ottawa had the resources it needed to clean up from the storm.

The Progressive Conservative leader visited Ottawa nine days after the powerful and deadly storm that left tens of thousands of people without power.

He faced questions from reporters about why hedidn’t visit the capital in the immediate aftermath of the storm.

Ford said the CEOs of Hydro One and Hydro Ottawa heard from him “every single day,” along with Ottawa’s mayor and other local officials.

“I just want to clarify one thing: I will always have the people’s backs in Ottawa,” he said.

Ford was speaking with MPP Jeremy Roberts on the roof of the Ottawa Citizen building on Baxter Road, overlooking the Queensway. He was announcing the PCs’ plan to widen Highway 417, previously announced earlier this year. It was the PC leader’s first visit to Ottawa of the campaign with election day coming up on Thursday.

In a statement, the Ottawa Citizen said it was not informed ahead of time that Ford would be speaking on top of the building where its offices are located, noting that the newspaper does not own the building, and reporters have been working virtually throughout the pandemic.

“Credible news organizations like the Ottawa Citizen take the utmost care to remain neutral and present information in a way that does not favour one party over another,” the statement said. “So you can imagine the shock and anger in our virtual newsroom when we discovered that the leader of the Ontario Progressive Conservative Party was giving a news conference on the roof of the building that houses our offices.”

Ford was also asked about Nepean MPP Lisa MacLeod receiving $44,000 over three years as an MPP allowance from the local riding association.

“When I found out about anything like that, I was frustrated, to be frank with you,” he said. “But it was all by the law …. it went to Elections Ontario.”

Ford reiterated he wants to revisit the practice.

“I think all three parties, or four parties, need to get together and have a chat about it after this election. I want to put an end to it.”

MacLeod was not at the announcement with Ford and Roberts on Monday.