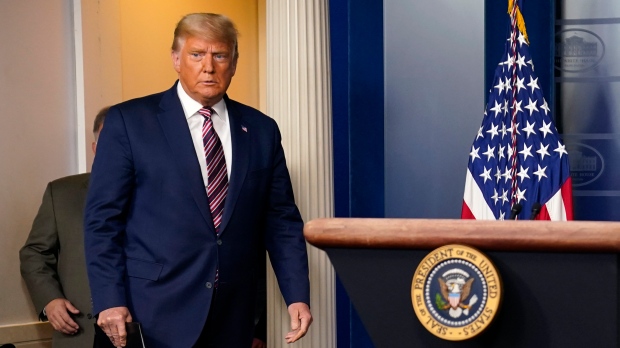 OTTAWA — The idea of U.S. President Donald Trump visiting Ottawa on a speaking tour after leaving the White House received a cool reception from a city committee.

The idea came up on Thursday as the Finance and Economic Development Committee debated a bailout package for the Ottawa Sports and Entertainment Group, which runs Lansdowne Park’s commercial sector and owns the sports teams that play at TD Place.

“Maybe you can do the Donald Trump rally/exile tour; you know, bring him up to Ottawa and see if you can fill the stadium,” Watson said.

“I’ve actually been saying that over the last couple of months that if President Trump does lose the election, I think the biggest event that I could probably produce in 2021 is to bring President Trump on a speaking tour like Barack Obama has.”

As Craig discussed the possibility of a Trump stop in Ottawa, several members of the committee were seen on the YouTube feed signalling “no” with their hands.

Craig spoke to the committee about previous concerts at Lansdowne that help shine a light on Ottawa, including the 2017 Grey Cup halftime performance by Shania Twain. Craig also said Ottawa is a big market for classic rock and country music.

Trump lost last week’s election to Joe Biden, and is scheduled to leave office on Jan. 20.