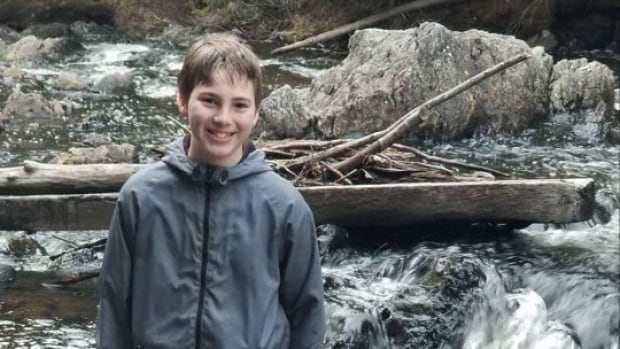 The 13-year-old decided to dive into his family’s above ground pool after his mother, Natalie Richard, strictly told him not to all day.

“The doctor said there aren’t many people that even get to talk about it, let alone walk away from this injury,” Richard said.

Sébastien’s family was having friends over last Friday night. One of the teens visiting the Quispamsis family, tried diving into the pool, when he was told not to.

So Sébastien, who is described by his mother as courageous and likes to try new things, wanted to try it too.

I could’ve been paralyzed. One wrong move.​​​​​​– Sébastien Gogan

When his mom wasn’t looking, Sébastien thought he could sneak in a quick dive.

But when he dove in, Sébastien didn’t have his hands clasped in front of him. So he ended up hitting his head at the bottom of the pool, which is just over four feet deep.

‘It was just scary’

When he came back to the water’s surface, Sébastien immediately told his mother what had happened and that he didn’t follow her instructions.

With a sore neck that he could barely move, Sébastien got out of the pool and sat down, where he was assessed by his family. They were also concerned he might’ve had a concussion.

The family found out later, the teen had a front crack in his C6 vertebrae.

“I could’ve been paralyzed,” Sébastien said. “One wrong move.”

It can happen to anyone

Now Sébastien is wearing a neck brace and will be visiting a specialist next week. He’s not sure how long he will have to wear the brace.

But he can’t take part in his favourite hobbies like cycling, making YouTube videos or hunting for waterfalls along wooded trails. Instead, he spends a lot of time watching television and playing on his phone, which has to be angled at a certain way so he can see the screen. Even getting out of bed is hard in the morning.

“You don’t realize how much you use your hips and shoulders,” Richard said.

It’s impossible for Sébastien to wear t-shirts or hoodies and has been forced to wear button up shirts so it puts less strain on his neck.

Now Sébastien and his mom are trying to warn other families about the dangers of diving into shallow water. And that rules are put in place for a reason.

“It was an absolute nightmare,” Richard said. “It’s what we warn our children against doing.”

The organization works to prevent drowning and water-related injury in the Maritimes.

“Being safe around the water is paramount in the summer,” Ferguson said.

He said jumping into unknown or unsafe waters accounts for 10 per cent of drowning deaths in the Maritimes. And most people drown in lakes, rivers or the ocean.

Even if a person is jumping into water they’re familiar with off a dock or a boat, he said water is always flowing and the bottom of that body of water is always changing.

And if you’re swimming in a pool, always make sure the water is deep enough. At public pools, water levels have to be eight feet deep in order for people to dive in.

“If you’re splashing around in a backyard pool, it’s likely not eight feet,” he said. “So just be careful there.”