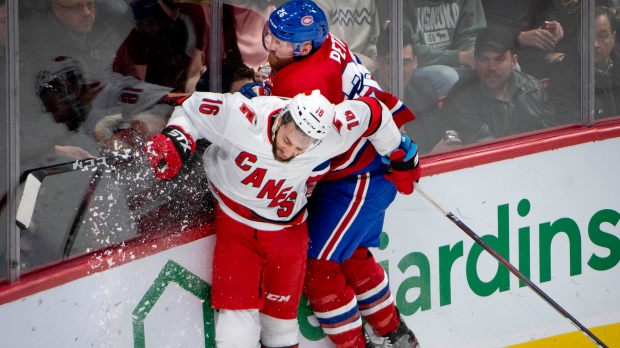 MONTREAL — Jeff Petry scored 52 seconds into overtime as the Montreal Canadiens earned a 4-3 victory over the Carolina Hurricanes on Saturday night.

Charlie Lindgren made 27 saves in his first start since Feb. 4 — a 5-4 shootout victory in New Jersey. Carey Price got the night off after playing 11 consecutive games.

Haydn Fleury, Joel Edmundson and Justin Williams scored for the Hurricanes (35-24-5), who forced overtime after being down 3-0.

Backup goaltender Anton Forsberg, who also played on Friday, allowed three goals on 20 shots before being pulled in the second period. Alex Nedeljkovic made 18-of-19 saves in relief.

The only goal he let in was to Petry in overtime on the breakaway, top corner, for his 10th of the season.

The Canadiens had blown two-goal leads in their previous four home games (0-2-2) and they again didn’t make it easy on Bell Centre fans.

Edmundson made it 3-2 at 1:14 of the third when his wrist shot from the blue line soared into the top corner of the net. Andrei Svechnikov was screening Lindgren on the play.

After a back-and-forth third, Williams tied the game for Carolina with 1:17 remaining on the clock by deflecting Edmundson’s point shot.

The Habs flew out of the gates looking to end their skid.

They were leading 8-0 in shots when Danault completed a nice passing play from linemates Tatar and Gallagher to slide the puck five-hole on Forsberg. With the assist, Tatar set a new career high with 59 points.

The Hurricanes found their legs after that and tested Lindgren but could not find the back of the net.

Montreal started the second period with similar energy to the first and scored twice within 17 seconds to take a 3-0 lead.

Domi capitalized on a scramble in front of Forsberg for his fourth goal in as many games at 3:46. With fans still cheering for Domi’s goal, Gallagher fired a one-timer on a rebound from Tatar at 4:03 to end Forsberg’s night.

The ‘Canes got one back when Fleury threw a puck on net from the point that found its way through a couple of bodies and under Lindgren’s glove at 7:45.

With Williams in the penalty box for slashing, Lindgren denied Vincent Trocheck on the short-handed breakaway with five minutes left in the second.

The Hurricanes are now one point behind Columbus for the second wild-card spot in the Eastern Conference.

This report by The Canadian Press was first published Feb. 29, 2020.