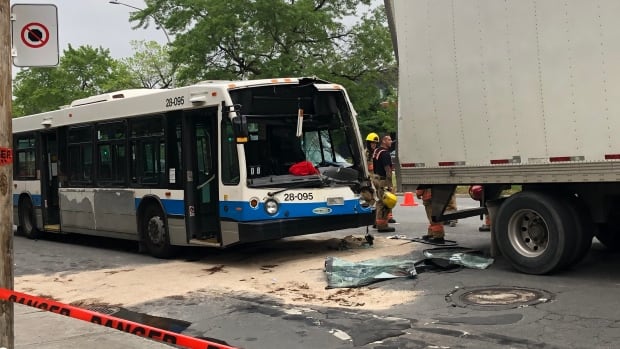 An STM bus driver has been taken to hospital and is in critical condition after a collision with a tractor trailer in Montréal-Nord.

The incident took place at around 9:00 a.m. near the corner of Pelletier Avenue and Henri-Bourassa Boulevard Monday morning.

Police say the driver of the tractor trailer was stopped at a red light when the STM bus crashed into it.

“We don’t know the real reason of the impact. Maybe the driver had a health issue, he was just not looking in front of him, that’s all going to be part of the investigation,” said Boisselle.

The STM driver, in his 40s, was trapped in the bus. First responders used the jaws of life to free him, and he was then taken to hospital with serious injuries to his lower body. He remains in critical condition.

The driver of the tractor trailer was not injured, Boisselle said.

There were five passengers on the bus at the time but only one of them, a man in his 30s, suffered from minor head injuries, he said.

The Montreal police collision unit is analyzing the scene.