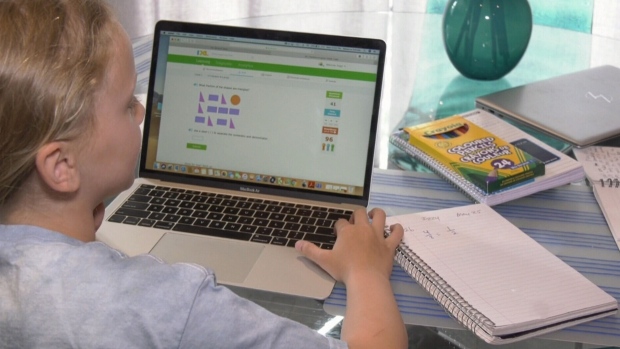 MONTREAL — Monday marked back to school for thousands of Montreal-area students, but all of the classes are online and both the board and parents are still trying to work out the kinks.

Rebecca Sohmer, whose daughter Isabelle is a first-grader at Royal Vale School in Notre-Dame-de-Grace, thought Isabelle would be participating in daily online lessons provided by the English Montreal School Board (EMSB).

But Sohmer recently found out Isabelle’s teacher will only be checking in with her once a week. The teacher decided to teach smaller groups of children at a time.

“Who is making the decisions? Why haven’t they been able to figure this out?” Sohmer asked. “The ministry blames the teachers, the teachers blame the ministry. Somebody figure it out.”

The EMSB says the directives from the ministry of education give teachers considerable leeway.

“What they’re required to do is speak to students at least once a week,” said Michael Cohen from the EMSB, adding that teachers are under an immense amount of stress.

Isabelle’s older brother Max, who is in grade four, speaks to his teachers twice a day.

“Today our English teacher was telling us to write a poem, and science and gym teacher told us work-outs to do,” he said.

The EMSB said parents have the responsibility to use online material available weekly on the board’s website. The teachers are really only there to make sure the child is doing alright.

Sohmer is worried about the quality of the education her children are receiving, especially considering the contrast between her son and daughter’s teachers.