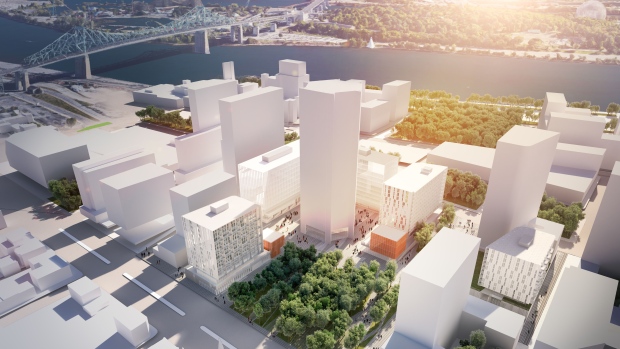 MONTREAL — The site of the Radio-Canada building is about to be transformed into a 2,000-unit condo development called the Quartier des lumières.

Developers MACH and Devimco Immobilier announced a partnership Tuesday with the Fonds immobilier de solidarité (FTQ) to complete the mixed-use project. It is expected to cost $3 billion.

When completed, the site is expected to include condos, rental apartments, social housing, office space, shopping and activity spaces, as well as more than 5,000 square metres of public green spaces.

The condos will be built in the former parking lot west of the Radio-Canada building at the corner of Wolfe Street and René-Lévesque Boulevard.

“When this project is finished there’s going to be warm bodies on the site at all times. Probably 10 to12 thousand people will be living, working and playing there at all times, so yeah, it’s a community,” said MACH president, Vincent Chiara.

The project will include 1000 units dedicated to social and affordable housing, but work won’t begin on those right away. “The phase one is the condo portion of the project,” said Marco Fontaine, vice-president of development and marketing at Devimco. “We’re only starting with that phase because its what we got liberated from Radio-Canada. So Radio-Canada is still occupying a good portion of the site, and the extreme west side of the site is where the condos will be situated.”

Critics argued that the condos weren’t what the city needed. “We were waiting for a first phase which included social housing in the first step because there is a housing crisis in Montreal right now,” said Eric Michaud, a member of the Ville-Marie tenant’s association. “We need more social housing in downtown than condos right now.”