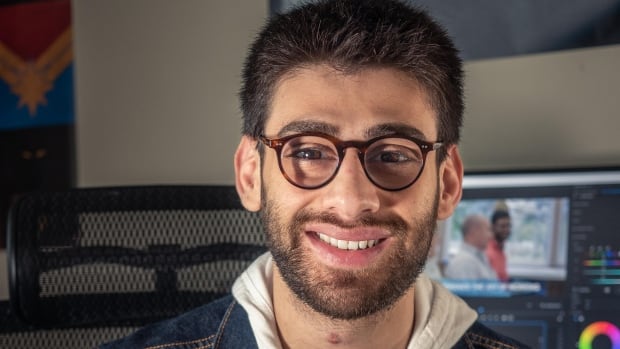 We’re barely eight months in and London filmmaker Stefan Sago can’t summon anything nice to say about the year 2020.

“It’s been a rough year,” he said. “We gave up on our dreams, you could say, especially this year.”

The year 2020 started with the death of a billion animals in bush fires so intense they turned Australian skies a hellish shade of orange. Then, came the global pandemic that has so far infected millions of people and left hundreds of thousands dead.

Then came the raw grief, anger and exhaustion in the wake of Floyd George’s death, the latest in a long string of Black men killed by white police officers under questionable circumstances.

Sago said the injustice he was seeing was heartbreaking, not just for him, but for many of his friends, who are Black.

“They have been through a lot,” he said. “I have a buddy who has experienced, I don’t want to say exactly, but really close to what George Floyd experienced. He had a knee on his neck when he was arrested.”

“I was kind of fed up with that,” Sago said.

So he created a video he hoped would be a tonic.

The power of words

“I wanted to tell myself and tell my friends ‘it’s okay the way you’re feeling. It’s normal. Here’s what we can do. Don’t give up on 2020, we can still make it a great year.'”

To do it, Sago enlisted the help of London educator and speaker Leroy Hibbert, who helps people of all backgrounds believe that, despite all of its flaws, the world can actually be changed.

“He wanted to make something positive and motivational that would help the community and help people,” Sago said.

“I thought it was fantastic,” he said. “Especially for the time we’re living in now.”

Sago said he and his friend Christina made the video by simply filming Hibbert in his home with his wife Helen and his grandson Lincoln. The audio is unscripted and was captured during a nearly hour-long conversation with Hibbert.

“That’s just Leroy being Leroy,” Sago said. “The original audio file was 51 minutes and I had to cut it to one minute of amazing Leroy talk.”

‘The backstory is I come from war’

One of the reasons Sago wanted to share Leroy’s message with people is because he knows what it feels like to be the odd man out.

“The back story is I come from war,” he said. “I was born in Iraq and I was there when the war happened. So I had to move from Iraq to Syria and I was a refugee there.”

“I have experienced discrimination, but not based on my race or my colour. It’s more that I was a minority. You know? An Iraqi kid in a Syrian country.”

“It was just kids being kids and bullying, but it was a form of discrimination.”

Sago and his family eventually made their way to Canada.

“We left to escape it and I look at my friends and they can’t escape it.”

“Words can impact how a person lives,” he said. “It’s something that’s intangible but has a tangible result. Words can make a child really enjoy and flourish in education and words can actually destroy a person based on what you say about them. No matter where they go they are reminded that they are not equal or good enough.”

“They’re successful people but at the end of the day they get reminded, ‘Oh yeah, I’m Black. This is going to happen to me.’ To me, this is injustice.”

Part of the film’s message, Hibbert said, is for people who are the victims of discrimination to speak up, to find their power and use it to make the world a better place.

“A friend of mine likes to say ‘silence creates violence.’ Words locate us, words also set boundaries of our lives and words affect us directly.”

“You look around collectively as far as race and racism and those words can be used to put a wedge between communities and put people together,” he said. “We have to hold ourselves to account as to what messaging we are sending to people and how we want to build communities up.”