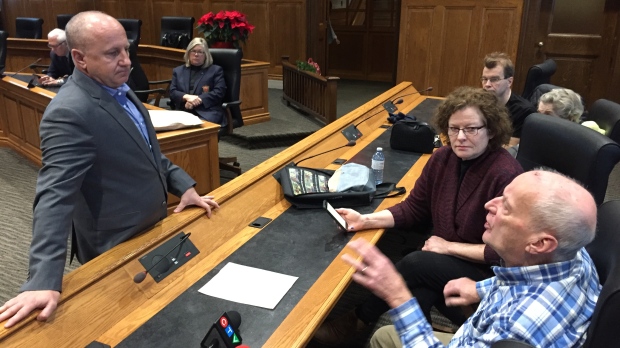 Emotions hit the boiling point after council unanimously endorsed an agreement to sell the neighbouring property, 50 King St., to private developer, York Developments. A pending deal would see York also acquire the courthouse building and the riverfront property it sits on.

“The county does own 399 Ridout street and they have the authority to sell it,” said Middlesex CAO Bill Rayburn to a small group of heritage advocates who put him on the spot after the meeting adjourned.

Rayburn later explained in an interview that the process to sell the building has been in place for several years. He said there has been ample opportunity for the public to voice concerns.

“When we rezoned the four or five years ago we were very clear that we were going to develop the property and that that development would enhance, and we’d be looking for development and construction partners” said Rayburn. “We’ve done exactly what we’ve said we’d do.”

While the property is protected by various heritage designations, advocates contend those protections only go so far.

“Private corporations are all in the business of bottom line,” said Chovas. “Public properties are a different kettle of fish and you cannot say that transferring from the public into private hands will have the same protections.”

York Developments has said it would leave the historic castle-building intact, but does plan to develop the property for mixed use, including commercial and residential.

County administration offices would remain in the building for the next four years.

The sale price for either property has not been disclosed.