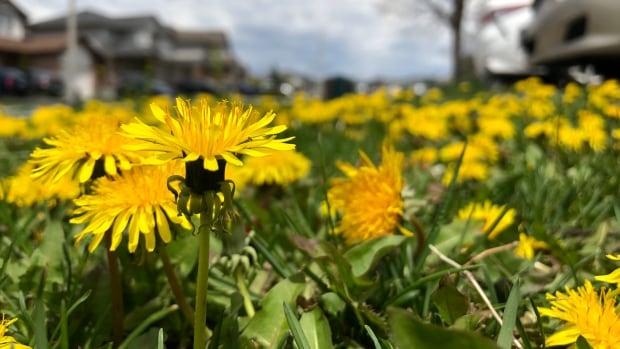 A Waterloo woman says she was told to cut her grass by city bylaw officials even though she was trying to help pollinators by taking part in No Mow May.

Jacqui Alac received a notice from bylaw on May 28 indicating she had grass and weeds over 15.24 cm (six inches) in her yard. The city’s bylaw says people need to keep their grass under that height. She was given until Tuesday to mow her lawn.

Alac says she was holding off cutting the grass and weeds because she was taking part in No Mow May, a month-long campaign calling on people with lawns not to cut the grass to give pollinators access to flowers like dandelions.

The movement was started by the U.K.-based conservation charity Plantlife. Trevor Dines, a botanical specialist with the charity, told CBC News the “sheer quantity of flowers and nectar production on lawns mown once a month can be astonishing.”

Alac says she was a bit disappointed to see the notice from bylaw, particularly because Waterloo is designated as a bee city by Bee City Canada. The city’s website says it received the designation “due to our efforts to support native pollinators and their habitat” on city-owned lands.

Alac says it seems like “a huge waste of resources” to have bylaw officers respond to calls about grass being too long, particularly when people are letting their lawns grow for a purpose.

The city’s director of communications Tony Iavarone said bylaw officials have received “a significant number of complaints about long grass and weeds, but we have not heard of No Mow May until now.”

“In order to stand down on these types of complaints we would need a council directive. Otherwise, we have an obligation to respond to these complaints,” Iavarone said.

She also mowed her lawn on Monday, the first day of June, because the campaign was over.

For next year, Alac would like to see the city discuss allowing people who care about the bee population to take actions like letting their grass and dandelions grow in the spring. That may include providing signs for people taking part in No Mow May to let their neighbours know why they’re not cutting the grass.

“It only makes sense to make the bylaws match best practices, which it seems to be that No Mow May is a best practise situation and we should stop spending taxpayer money on enforcing something that maybe shouldn’t be enforced,” Alac said.