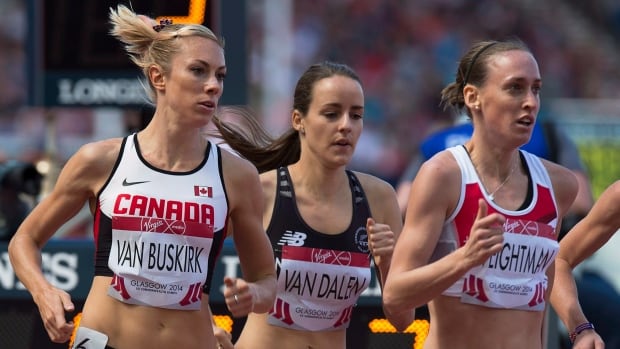 While Canada’s track and field community was rocked by allegations against former national distance coach Dave Scott-Thomas, athletes say shining a light on alleged abuses in the sport is a solid step forward.

Former middle-distance runner Megan Brown came forward in a Globe and Mail story on Saturday alleging that Scott-Thomas, a former University of Guelph coach, groomed her for a sexual relationship when she was 17.

Kate Van Buskirk and Jennifer Brown applauded the runner — a star on the rise when she met Scott-Thomas in 2001 — for telling her story, and hope the communication continues.

“It’s good the conversation has opened from a really terrible situation,” said Jennifer Brown, a Paralympic thrower. “We don’t want the terrible situation to be what dictates the conversation, we need to be more active and proactive in establishing the systems to support this because we know it’s a problem. Yes, it’s absolutely bringing attention and thought to it, but the fact that athletes are still being harmed in this is terrible.”

“Furthermore, the continued appraisal of Mr. Scott-Thomas, and denial of any wrongdoing on the part of [Athletics Canada], only reinforced his position of power over the victim[s].”

Saturday’s bombshell sparked an outpouring of anger on social media from athletes including Gabriela DeBues-Stafford and Sasha Gollish.

Van Buskirk, one of Canada’s top middle-distance runners, hopes the emotions can be turned into “positive energy” for progress.

“My call to action and my hope would be that I know tempers and emotions are really high right now, and we’ve all been feeling that,” Van Buskirk said from Flagstaff, Ariz., where she’s training for the upcoming season. “It’s great to vent on social media, but that doesn’t really help anyone. So, as much as possible we are here to have those hard conversations and we want people’s feedback. That can create some positive momentum and sense of ownership as well if people feel like they have a place to communicate and discuss and express their views and thoughts.”

On behalf of the Athletics Canada Athletes Council and Athlete Directors, I want to share the following statement. And I reiterate to my fellow athletes: we were elected by you, to serve you. We stand with you, we hear you, and we are here for you. We all must do better. <a href=”https://t.co/mCqT1GGqiA”>pic.twitter.com/mCqT1GGqiA</a>

None of the allegations against Scott-Thomas — who led the Guelph Gryphons to 37 national titles in cross-country and track and field, and earned U Sports coach of the year in the two disciplines 35 times — have been proven in court.

The University of Guelph fired Scott-Thomas on Dec. 16 for unprofessional conduct. It released an apology on its website after the Globe and Mail article was published.

Scott-Thomas was also a coach on 16 Canadian teams, including the 2016 Rio Olympics and the 2015 and ’17 world track and field championships.

In a Jan. 9 statement, the university said it received a complaint in 2006 from a family member of a student athlete, and while an investigation didn’t substantiate all of the allegations, it determined some misconduct had occurred and Scott-Thomas was suspended for four weeks. The university received a complaint from another student athlete about Scott-Thomas this past fall, and again retained an independent external investigator. Scott-Thomas was placed on paid leave pending the outcome.

Attempts by The Canadian Press to reach Scott-Thomas have been unsuccessful.

‘Accept responsibility… whether you were there or not’

Van Buskirk said the athletes council would have liked an “an acknowledgment of responsibility and an apology to Megan and to the broader athletic community [from Athletics Canada].

“Part of what makes this tricky is that there is a lot of turnover at AC, of course the two main complaints that were filed were done so years ago, and I think within any organization, if you’re kind of presented with new and really shocking information, it can be difficult to understand the gravity of that or know how to really approach it, especially if you weren’t part of the organization at the time.

“However our take, mine personally and our take as athlete directors is that anyone who comes into an administrative or power role in an organization especially a national sport organization needs to, as the face of that organization, accept responsibility even for what’s happened in the past, regardless of whether you were there or not.”

The athletes council, which was formed in 2012 but existed in different forms as early as the 1990s, has between 12 and 15 members at any given time, and the three chairs also sit on Athletics Canada’s board of directors.

Van Buskirk and Jennifer Brown both noted that Athletics Canada was one of the first national sport organization to implement a third-party commissioners office two years ago to handle athlete complaints of this nature.

Former Minister of Science and Sport Kirsty Duncan unveiled last March an investigation unit and a toll-free confidential helpline in an effort to combat harassment and abuse in sport.

The initiative came after several high-profile sexual assault and harassment stories in Canadian sport. In 2018, Allison Forsyth was among several former members of Canada’s ski team who spoke publicly about the abuse suffered at the hands of former coach Bertrand Charest in the 1990s. Charest was convicted last year of 37 offences of sexual assault and exploitation.

Track and field was rocked by another scandal last May when former Ottawa Lions coach Andy McInnis and board member Ken Porter received lifetime bans from Athletics Canada for allegations of sexual harassment and misconduct. The allegations have not been proven in court.

McInnis, who coached Canada’s 4×100-metre relay team to gold at the 1996 Atlanta Olympics, won an appeal to the Sport Dispute Resolution Centre of Canada (SDRCC), which ruled some bias among the commissioner’s office. McInnis remains provisionally suspended while under investigation from a new commissioner.

She and Van Buskirk said the athletes commission is compiling its own resource hub, which will provide information and resources to everyone from athletes and coaches to parents, volunteers and officials.

“Then as always the three athlete directors, we have published our personal emails and we’re always reachable too,” Brown said.

“Sport safety is a top priority for the council, and we really encourage any athlete who [might be thinking] ‘I kind of have a strange feeling, something doesn’t seem right,’ to reach out to us . . . we’re always here for that. Sport safety including some of the gaps around sport safety is a real priority for us. We’re looking at what we can do in the short-term to provide materials and information and any resources we can, but we have a lot of work to do on this end.”