Breaking News
Man who struck and killed Alberta woman in car at 200 km/h fires lawyer again
Calgary athlete who lives in her van shivers through cold snap: ‘This is the worst!’
Minute at the Movies: Jan. 17
Calgary city councillors lobby for ban on conversion therapy
17 Jan, 2020
Skip to content 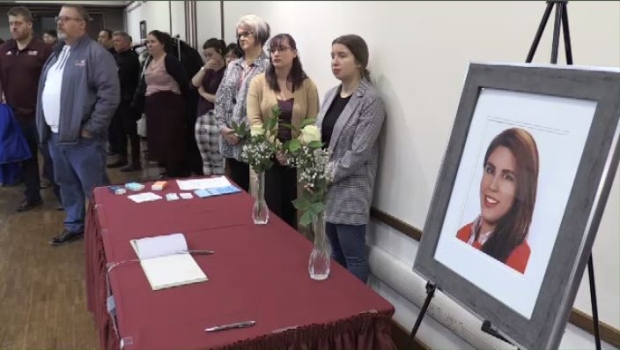 HALIFAX — It was a sombre afternoon at Saint Mary’s University as people of all ages gathered to remember the lives of two students who died this week.

Maryam Malek and Fatemeh Mahmoodi were both students in the master of finance program at Saint Mary’s.

The pair lost their lives when a Ukraine International Airlines plane crashed Wednesday morning in Tehran just after takeoff from the Iranian capital.

“Fatima and Maryam were my classmates and my friends — my close friends as well,” said Varan Agrawal. “It should not happen like this. They were very innocent and it shouldn’t be like this.”

The flags at Saint Mary’s are being flown at half-staff in mourning and solidarity.

Classes for master of finance students were cancelled Thursday so students could mourn the loss of Malek and Mahmoodi.

It’s now believed there were eight people with connections to Nova Scotia aboard flight PS752, including Masoumeh Ghavi, an engineering student at Dalhousie University and her younger sister Mandieh, who was about to start school in Halifax.

Both women perished in the crash.

“I cannot even imagine how hard it is for her family,” said Masha Majidi. “They said goodbye in the airport and probably they were happy because they were starting a new journey here and it’s all gone. It’s over now.”

Halifax dentist Dr. Sharieh Faghihi was also aboard the jet, as well as Shekoufeh Choupannejad, who was an obstetrician-gynecologist who worked in Halifax before moving to Edmonton.

She died along her two daughters — Saba and Sara — who were also passengers on the plane.

Friday afternoon’s service at Saint Mary’s university was an opportunity for people to remember all the victims of the crash.

“The Ukraine International Airlines tragedy has left a devastating impact on our campus, our community and communities across Canada, and academic communities all across universities,” said Mary Navas, the Saint Mary’s University Students Association president.”Within the Santamarian family, we’re all mourning the loss of these smart, strong, capable women and sending solidarity to the Iranian community and the entire globe.”

A memorial service will also be held Saturday afternoon at Dalhousie University.

It was originally scheduled to take place at the university’s Faculty Club, but has now been moved to the Rebecca Cohn Auditorium, because organizers expect a large crowd.

That service is scheduled to start at 2:30 p.m. and is open to the public.

Why N.S. could seize insurance money given to man not criminally responsible for killing wife

Moncton’s new shelter to fully open in ‘a matter of days’: executive director