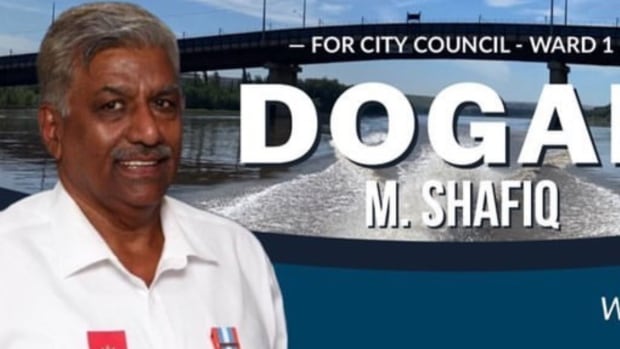 A Fort McMurray councillor for the Regional Municipality of Wood Buffalo has been reprimanded for his conduct, including comments he made about Indigenous people at a February budget meeting.

Brown said formal complaints were made against Dogar for incidents in 2021 — in one instance about his interactions with a municipal employee and in another instance relating to Facebook posts he made.

Six other complaints were filed against Dogar about comments he made at a budget meeting in February of this year.

At the February budget meeting, Dogar made comments that Indigenous leaders and politicians said were hateful against Indigenous people.

Peacock found that Dogar violated council’s code of conduct. Among other things, the code prohibits councillors from speaking in a discriminatory way, using abusive language or disclosing confidential information.

Council voted unanimously Tuesday to support a list of recommendations from Peacock. Dogar left the room for the vote.

The sanctions include removing Dogar from council committees and from representing council, including travelling on council business, until he has completed training on Indigenous awareness and respectful interactions at the municipality.

Council also voted to issue Dogar a motion of censure and demand that he provide a public apology directed to the community and Indigenous communities.

A governance expert will be enlisted to help in Dogar’s training. The expert will provide a report to council before the councillor is permitted resume his duties.

After the vote, Dogar was given an opportunity to speak. He started by defending himself against the first two complaints.

He then moved on to the incident in February. Dogar said other councillors and the mayor didn’t bat an eye when he made the comments, and that it was only afterward — when the Athabasca Tribal Council issued a news release — that they raised issue with his comments.

But he said he was ready to apologize during council.

Dogar then started talking about a meeting about extending the chief administrative officer’s contract. Coun. Keith McGrath called a point of order.

“Sir, let me speak today,” Dogar said before his microphone was turned off.

The mayor upheld the point of order and Dogar was allowed to continue.

Dogar said that over the past few months he has opted to take training as he realized his English “leads to some misunderstanding at times … I apologize to anyone whom I have neglected with my current speech.”

He added: “We have a lot of good work to do in the community. Let’s do it. Let’s not waste time on unnecessary things.”

McGrath said he felt the apology was sincere. He said Dogar should be commended for his apology.

“And on behalf of the entire immigrants in the region, I also want to join him and apologize,” Banjoko said.

“I still think that you could do better. You didn’t specifically acknowledge the Indigenous people,” said Cardinal. “I think you should.”

“We should acknowledge that this land we have to … we owe loyalties to the First Nation,” he said.

Cardinal said Dogar’s additional words mean a lot to Indigenous communities and he acknowledged the apology.