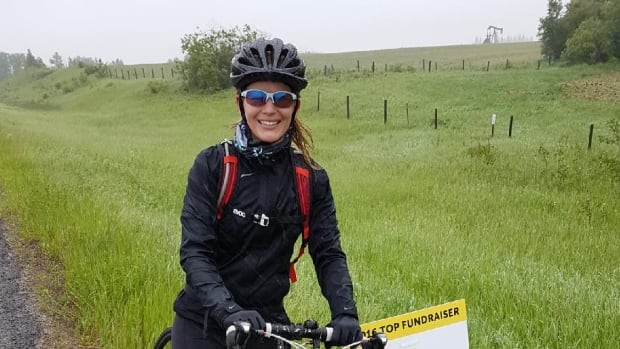 When Amanda Simms was diagnosed with multiple sclerosis six years ago, her aspirations for her career in nursing ended abruptly. She found herself seeking a new purpose even as the disease ravaged her body.

Simms became an ardent volunteer, doing anything in her power to help others with MS, including speaking in public to create more awareness in the larger community.

This month, her efforts were honoured by the  Multiple Sclerosis Society of Canada, which named her as recipient of its Young Leadership award for 2020.

“MS has made me face a lot of things,” Simms told CBC Radio’s Edmonton AM this week.

“It’s shown me that my plans don’t really matter, that life is going to happen anyway,” she said. “I had big career plans of my nursing and where I was going to go. It wasn’t just my job. It was my passion.

“I have to take those values that I found interesting and reapply them into my life and into my volunteer work to keep pursuing and keep on living life to the fullest. Even though MS has really given us a turn for the worst.”

Canada has one of the highest rates of MS in the world, with about 77,000 people living with MS and 11 new cases diagnosed each day, according to the MS Society of Canada.

The autoimmune disorder affects the brain and spinal cord, causing a wide range of symptoms including dizziness, depression and difficulty walking.

Simms was 26 and working as a registered nurse in the pediatric intensive care unit at the Stollery Children’s Hospital when she was diagnosed with MS. Hospitalized with severe pneumonia, she had lost her ability to walk.

Her physiotherapist flagged that to her doctors.

“I was rushed down for emergency MRIs and actually received a diagnosis that day of multiple sclerosis, which isn’t usual,” she said.

Early on after her diagnosis, Simms became a top fundraiser in events like the MS Bike and MS Walk.

Now, with her physical mobility affected, she is part of a national youth committee and volunteers doing one-to-one peer support with other MS patients.

When her neurologist delivered the news, Simms realized how little she knew about MS, despite being a health-care professional.

“I truly thought that I was going to have a rough time and then go back to my baseline and carry on as normal,” she said.

That realization is part of why she tells her story, putting a face to a disease that so affects so many people but is still poorly understood.

“I started sharing my personal story with fundraisers and different companies just to help bring awareness to the cause, to say thank you for the money that the research goes to — and also to show that disability can look like anyone.”