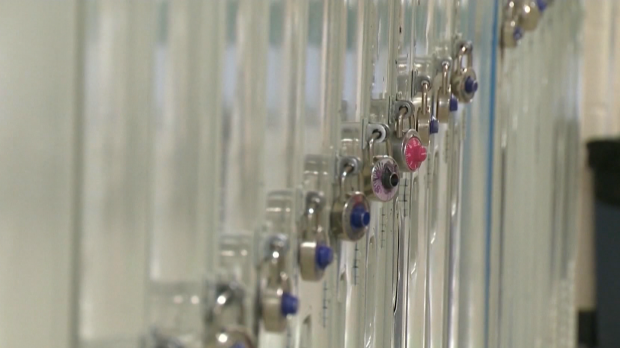 EDMONTON — It’s been just over one month since in-person learning resumed in Alberta schools. With 862 cases of COVID-19 currently being reported across 260 of them, Alberta’s teachers’ union as well as public education advocates are calling on the province to do more.

“What we’re hearing is it’s a very chaotic situation,” Wing Li, communications director for Support our Students Alberta, told CTV News Edmonton. “Some schools are lucky, but the plan should not be luck.”

As cases continue to pop up within the student body, Li says many children are forced to constantly shift between online and in-person learning.

“Some students have done this, we’ve heard, four times since September. So two to three weeks at a time and then you’re back,” she said. “How is that stable for anybody?”

One school in Edmonton has 65 per cent of its population isolating after two students tested positive for COVID-19.

“Unless it’s an anomaly, every case in the class means that class has to isolate,” Li said. “So this is snowballing into the fact that thousands of students are isolating from 200-some cases.”

Of the 165 students at St. Monica School, 107 will have to learn from home until they’re deemed safe to return to class.

Among the 11 per cent of Alberta schools currently dealing with COVID-19, the province’s chief medical officer of health, Dr. Deena Hinshaw, said Wednesday there are now three that have seen transmission of a new variant strain.

“What we know is that within households we’ve seen very significant risks of spread which is why, for example, if individuals who live in the same household as someone who’s diagnosed with a variant are all staying in that same household while that case is isolating, those individuals are considered to be exposed every day.

“If one of those individuals is a school child, they will have to stay home from school for the entire duration of time that the individual case is infectious and another 14 days to prevent the risk of transmission,” said Hinshaw.

Li says the emergence of new variants adds an extra layer of anxiety.

“It’s actually compounding the fears and also the mistrust of the information,” she said.

The public education advocate says she’d like to see more transparency from the province.

“They’re not being transparent or timely about the information in schools,” said Li. “I think Dr. Hinshaw was very clear that they’re not going to announce even just the zones of the schools, the regions that these variants are found in.”

The Support our Students communications director also says a clearer plan needs to be laid out by the province as well as more pandemic-specific resources for students.

“More resources for hybrid learning,” said Li. “Because as we go on into the fall, who knows what it’s going to look like?”

With in-school transmission suspected in 131 schools as of Wednesday, the Alberta Teachers’ Association’s (ATA) is still concerned about working condition.

“It’s one of those things that has been a persistent and consistent conversation that I have with teachers,” president Jason Schilling told CTV News Edmonton.

One of the union’s main concerns, Schilling says, is class sizes.

“We know in order to reduce the amount of COVID that we see within our schools, we need to reduce our class sizes,” he said. “We’ve been trying to address the class size with government the entire time.”

Another issue, according to Schilling, is the lack of security for substitute teachers.

“If they happen to become exposed to COVID in the matter of the work, they don’t have income security for two weeks,” he said. “Government can address that through putting substitute teachers on contracts.”

Schilling says he understands it all comes down to dollars and cents. With Alberta’s provincial budget one week away, the ATA president hopes there’s enough money announced for schools to help protect everyone involved in the public education system.

“It keeps me up at night sometimes,” he said. “Keeping schools open during a pandemic is a priority for government, so then they need to put the funding in place to ensure that.”

In a written statement to CTV News Edmonton, the Minister of Education’s press secretary, Justin Marshall, said the safety and wellbeing of school staff and students continues to be the government’s number one priority.

“We have funded $10 million in personal protective equipment for students and staff which purchased 1.6 million reusable masks and 466,000 litres of sanitizer,” the statement read in part.

“Alberta’s government also made substantial investments to school divisions with $120 million in increased operational funding, $250 million in accelerated capital maintenance funding – including HVAC and ventilation upgrades – and access to $363 million in funded reserves. This, coupled with the $262 million in federal funding, provides school authorities with access to $1 billion in additional funds, of which three quarters was directly funded by Alberta taxpayers.”

The statement goes on to say: “We will continue to follow the advice of the Chief Medical Officer of Health and we are ready to make changes to the school re-entry plan if needed based on her advice. It is not possible to cap class sizes at 15 students. To do so would require an additional 13,000 teachers and 13,000 additional classrooms, neither of which are readily available.”