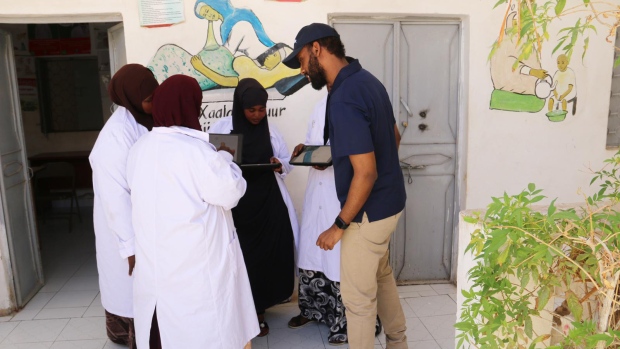 EDMONTON — Before Canadian Khalid Hashi and his team began their work in Somalia, the country of about 15 million people who mostly speak Somali and Arabic only had information about COVID-19 in one language.

“It was all in English,” says the Somali-Canadian, who was born in Ontario and raised in Edmonton.

The 29-year-old says he travelled to the Horn of Africa last spring to help kick-start a digital information campaign that would address concerns, misinformation and rumours about the novel coronavirus in a way communities and villages could understand.

“Initially, people were very hesitant to listen,” says Hashi, who has since returned to his home in Edmonton.

“There’s misinformation across every community. It was challenging and it still is challenging. But now there’s more information every day on the virus, and people are starting to understand the seriousness of the virus.”

Hashi says with the approval of Somalia’s health ministry, he expanded an app he had created three years earlier to include videos and information about COVID-19 in the local languages. Front-line workers in Somalia went door-knocking to 45 villages and continue to show the videos on tablets.

“This content, (that is) really helping with prevention and risk mitigation, has scaled across four regions, has reached 60,000 (nomads) and there’s about 100,000 impressions on social media,” he says.

His team has since incorporated features on the app that send communities emergency health alerts about the pandemic.

Somalia has just over 5,000 confirmed cases of COVID-19 and more than 1,000 that are active. About 144 people have died of the infection, said Abdihamid Warsame, a research fellow at the London School of Hygiene and Tropical Medicine. Right now he’s based in Somalia working on a research project on COVID-19.

“There’s quite a lot of misinformation about the disease, that it doesn’t really exist in Somalia, and it’s a disease of foreigners. People don’t really take the precautions that they should. And I think Khalid’s work is doing a lot to try and overcome this challenge,” Warsame said.

“There have been fewer and fewer cases as time has gone by. Khalid’s expertise and his material and his distribution channels are definitely helping to contribute toward the COVID-19 response in Somalia.”

Hashi says Somalia’s health ministry reviews the app’s content and makes sure it resonates with communities.

“We’re not talking about a village. We’re talking national distribution of this content.”

Public health videos educate locals on symptoms they should be looking for and on where people can get tested.

“It really helps guide people for next steps on how to stay safe.

“We did our first video for a hospital that we were working with to help support our doctors. Doctors would show the video to their patients … people saw value (in that) and now that content is going to rural communities.”

Hashi says some of the videos he and his team have created in Arabic are being used in Yemen.

The idea for Hashi’s original app came to him in 2017 when he was visiting his grandmother. He was taking her to a doctor appointment when he learned Somalia didn’t have a good way to track medical records.

“OGOW means ‘to know’ in the Somali language,” Hashi says. “I named it that because it’s me getting to know my grandmother. It’s a constant reminder of why I got into this work.”

This report by The Canadian Press was first published Feb 14, 2021