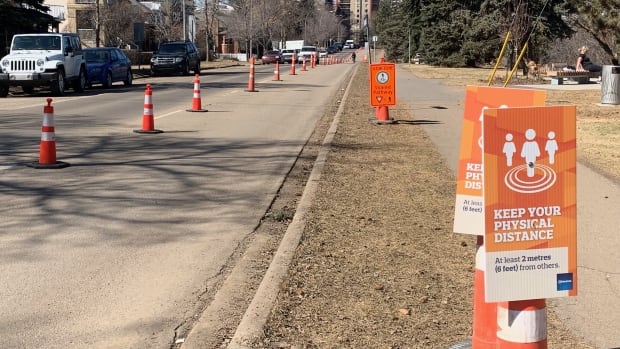 The City of Edmonton is designating 10 kilometres of roadway this spring for people to walk, jog, cycle, rollerblade and ride scooters.

The city will begin cordoning off lanes for its Shared Streets program as it completes seasonal street sweeping over the coming weeks.

The lanes are meant to give people safer places to exercise and spend time outside during the COVID-19 pandemic, similar to last year.

“The pandemic really placed a lot of restrictions in terms of our normal behaviour and normal interactions,” said Olga Messinis, city director of traffic operations.

The city established the lanes in more densely-populated and popular areas, Messinis said at a media availability Friday.

“Let’s say you don’t have access to a backyard or there are not that many green spaces adjacent to you that you can actually really get out and get that physical activity that you need,” Messinis said. “We know that might not be available to everybody.”

The non-profit group Paths for People welcomed the program again this year and is pleased the city is introducing some lanes earlier than anticipated.

While the number of lanes is a good start, there is demand for more shared roadways, said chair Stephen Raitz.

“We’d encourage the city to continue bringing back more of these to our main streets such as Whyte Avenue,” Raitz said in an email.

Last year, the city designated a total of 28 km of shared streets and mobility lanes, compared to this year’s 10 km.

Raitz said core neighbourhoods like Garneau and Strathcona could use more lanes, as well as routes connecting different areas of the city such as the east end of Jasper Avenue.

Starting Friday, one lane of Victoria Promenade between 116th and 121st streets will be closed to motorized vehicles.

The speed limit for vehicles on the roadways will be lowered to 40 km/h.

The city also announced 10 streets where vehicles, limited to 20 km/h, will share the road with people,