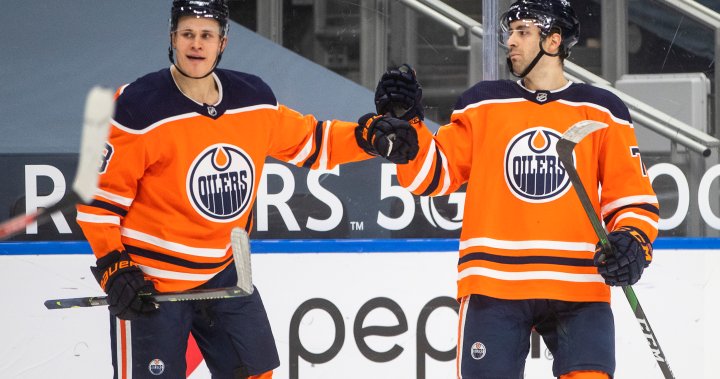 The Edmonton Oilers tried out a new look on Sunday as they returned to practice after two days off.

Ethan Bear, who’s been out of action for two weeks after getting hit with a puck while on the bench, was paired with Evan Bouchard. Both shoot right, so Bouchard moved over to play the left side.

“We have to talk with the doctors about Bearsy. We wanted to scrimmage today with a couple of days off. We threw Bouchard over there. He’s played some left before in junior. We just wanted to have a look at him in the scrimmage today. We’ll see how things go moving forward,” said head coach Dave Tippett.

Tippett said he’s had a few defenceman in his coaching career who have been able to successfully play their off-side.

“Some of it comes down to foot position and being able to open yourself up and not be locked in to just going straight up the well,” said Tippett.

Winger Jesse Puljujarvi was on the ice after being held out of Thursday’s game in Montreal. He was placed in the NHL’s Covid Protocol List that afternoon before being cleared to return to the team on Saturday.

“We have to follow the rules,” said Puljujarvi. “I’m glad to be back.”

Zack Kassian is out week-to-week after getting hurt in a fight Monday against Ottawa. He flew home on a commercial flight and is in quarantine.

“It’s a hand injury that he’s getting looked after. Hopefully, we’ll see him back around as soon as he can get out of quarantine,” Tippett said.