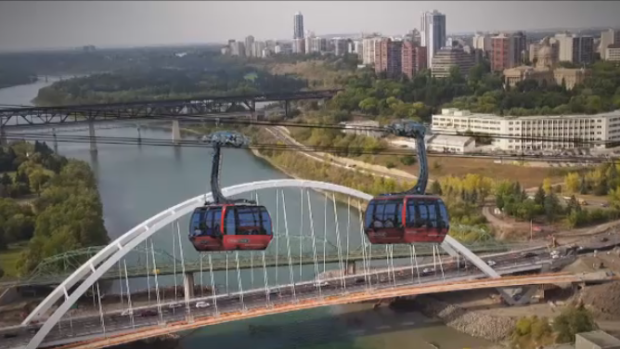 EDMONTON — Edmonton Mayor Don Iveson says he likes what he’s heard so far about the proposed urban gondola being debated at city hall.

Members of council spent much of Tuesday listening to a long list of speakers voice their support or objections to the proposed privately-funded project from Edmonton-based Prairie Sky Gondola.

“I think it solves an access egress issue that we’ve had in and around Rossdale,” Iveson told CTV News Edmonton during a video conference Tuesday afternoon.

“People are so excited about what the power plant could mean,” he said. “But if you can’t get people smoothly in and out of it than it’s really hard to contemplate something that would be economically viable.”

Prairie Sky Gondola CEO Jeffrey Hansen-Carlson made his case in front of council Tuesday morning after spending the past year working with city administration to put forward a proposal for the project.

“This is city building,” Hansen-Carlson told council. “I see a meaningful, sustainable, low impact utility for all of us. I see a dynamic and inspirational addition to our skyline.”

If approved, the estimated $150-million gondola would ferry passengers from downtown, past RE/MAX Field, to Whyte Avenue.

While council heard many voices supporting the project, not everyone appearing to speak shared that sentiment.

“Gondola’s are extremely disruptive of wildlife corridors,” said Kristine Kowalchuk from the Edmonton River Valley Conservation Coalition. “Just last year Parks Canada rejected a proposal for a gondola for the Banff town-site because it would negatively impact habitat and wildlife connectivity.”

Proponents of the project say if all goes to plan the gondola could be operational by spring of 2024.

Tuesday’s committee meeting ended with the necessary requisition to send the matter to council next Monday.

If given the go-ahead, the proposed project would enter its detailed design phase, including environmental impact assessments. Public and Indigenous consultations would also begin.

City council will continue to debate the urban gondola Monday when they could also vote on whether to proceed with the project.