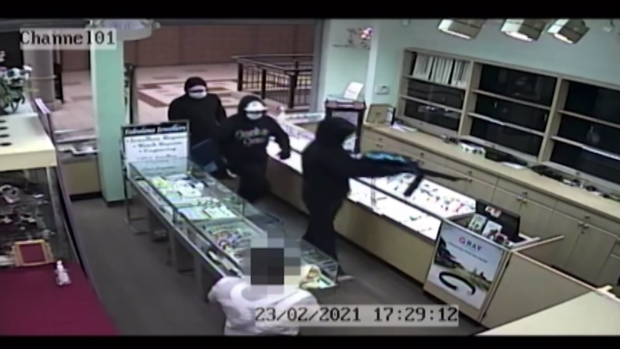 EDMONTON — Three people wearing masks and gloves went into a jewelry store at the Bonnie Doon Shopping Centre on Feb. 23 at approximately 5:30 p.m.

One suspect pointed a firearm at a store employee as they smashed display cases with a sledgehammer and loaded approximately between $200,000 and $300,000 worth of jewelry into two blue bins, police said.

The three people fled the store on foot, stole a vehicle in the parking lot and drove to a residential area about eight blocks northwest, police said. They burned the stolen vehicle, police said, and got into another vehicle being driven by a fourth person.

“Fortunately some neighbours saw that fire and it would’ve actually been really catastrophic because…they stopped the truck right underneath a very old tree, and one of the neighbours came out and doused it with a couple of fire extinguishers,” Sgt. Dave Green said. “Thankfully this didn’t turn significantly worse and burn down some houses.”

The second vehicle led investigators to an apartment building near 117 Avenue and Groat Road. Police searched a number of suites on Feb. 26 and found loaded firearms, a sledgehammer and approximately $6,000 in stolen jewelry.

The Edmonton Police Service released surveillance video of the robbery and parking lot on Thursday in an attempt to identify the other suspects.