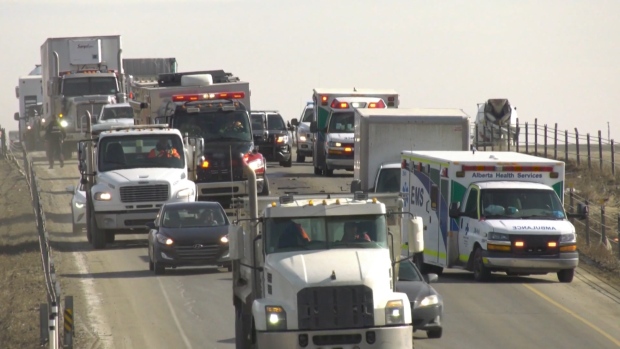 EDMONTON — A police officer was dragged by a fleeing vehicle in west Edmonton Friday morning but was not seriously hurt.

EPS said it pulled over two men heading west on Stony Plain Road near Winterburn Road around 9:45 a.m. and a weapon was spotted in their vehicle.

The driver then took off, dragging the officer for several seconds, then the vehicle stopped.

Officials said the officer was not seriously hurt and both people in the vehicle were arrested.

Traffic was reduced to one lane as police investigated the incident.

EPS also confirmed a separate collision at the scene.

A spokeswoman told CTV News Edmonton it appeared a vehicle struck a cube van that had slowed down for the police presence.

Two ambulances, a fire truck and a parked cube van were spotted along the roadway.