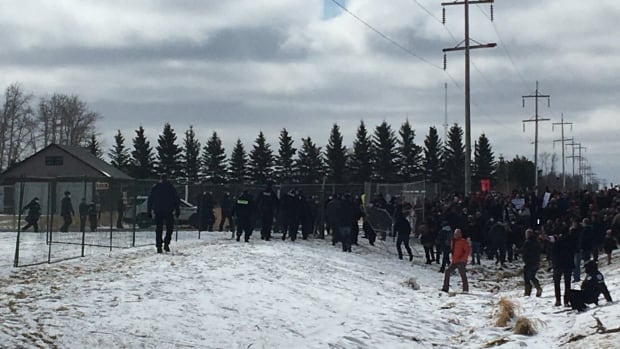 RCMP have identified and located a person allegedly involved with mischief and obstruction last weekend at the GraceLife Church west of Edmonton.

The individual was arrested without incident for Mischief under $5,000 and Obstruction in relation to a perimeter fence around the church, according to an RCMP news release. They were located outside the church on Sunday morning.

The person was released with conditions not to attend the church property, and to make a court appearance at Stony Plain Provincial Court on June 30.

Charges have not been laid before the court.

Police are still working to identify and locate other people involved in criminal activities on April 11.

At one point, a group splintered from the crowd and tore down part of a perimeter fence before it was restored by RCMP officers and others from the crowd.

The Enoch Cree Nation, which shares a border with Parkland County, released a statement that said demonstrators had trespassed on its land and vandalized a Nation member’s vehicle.

GraceLife church said in a statement its congregants were not present for the event.