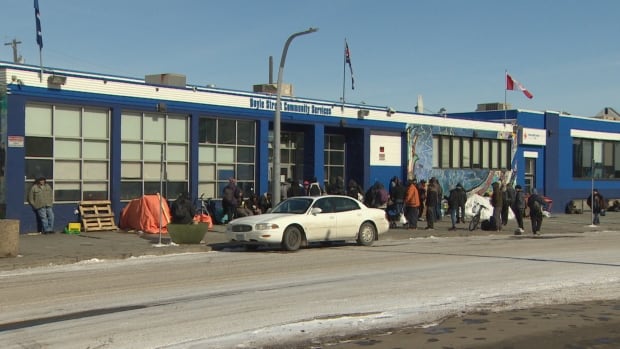 Director of operations Ian Mathieson says throughout the pandemic, employees have driven vulnerable people around, helped lift them off the ground or offered medical care — all without complaint.

So, it was with frustration this week that he scrolled through the details of the Alberta government’s critical worker benefit program, unable to decipher which of his employees qualify for a one-time, $1,200 pandemic bonus for frontline workers.

“I think it’s unfortunate that people who are working on the frontlines have that kind of level of uncertainty around something that could be really helpful to them,” Mathieson said.

At issue are a complex set of criteria, posted online late Wednesday afternoon, describing the eligibility for the benefit.

The $465-million program, cost-shared between the federal and provincial governments, is targeted at workers in health-care, social services and school support. Also included are private-sector workers who earn less than $25 an hour and work in the transportation, warehousing and sale of food and medication.

However, the criteria for each sector is different. There are also two different deadlines for private-sector employers to apply for the cash for their employees.

I have heard some concerns from frontline workers who are worried about being excluded &amp; I would like to provide some clarification on the Critical Worker Benefit and the eligibility of workers in the non-profit sector. <a href=”https://twitter.com/hashtag/ableg?src=hash&amp;ref_src=twsrc%5Etfw”>#ableg</a> 1/3

Mathieson says it’s convoluted and he can’t get straight answers.

“[It] seems pretty clear for the private sector how to access funds, but it almost seems like public sector and not-for-profits were kind of an afterthought,” he said.

Even if the organization qualifies, Mathieson isn’t sure if the workers who earn more than $25-an-hour will qualify. He also doesn’t know whether Boyle Street is supposed to apply for the money, like a private-sector business, or wait for someone from government to contact him, like a public-sector employer.

There’s also a time limit for private-sector employers to apply, and funding will be allotted on a first come, first-serve basis.

“Exhaustion of program funding may result in an employer’s application not being approved,” the guidelines say.

Every province had to draw lines, minister says

Labour and Immigration Minister Jason Copping said in an interview Thursday that he agrees the program is complex.

Five provincial ministries are involved, and some decisions about eligibility will be made within different ministries.

For example, health-care worker unions said last week they didn’t know which of their members are considered “critical” and qualify for the benefit. As of Thursday, they still hadn’t heard.

The Motor Dealers’ Association of Alberta has also been peppered with questions from dealerships since the benefit program was announced last week, association president Gerald Wood said on Thursday.

Dealers are puzzled about whether they should apply for the benefit for their employees, because the government considered dealership workers essential during the early days of the pandemic, Wood said.

Copping said almost 80 per cent of Alberta workers were considered essential last spring. Spreading the money available to all of them would leave the bonus payments a paltry sum, he said. “Critical” isn’t the same as “essential,” he said.

And, no — car dealership employees are not eligible for the benefit.

“There’s not enough funding to recognize everybody who continued to work, because the population is just simply too big. So we had to make choices, like many other provinces,” Copping said.

He stands by those choices, saying the Alberta government chose to prioritize health-care workers like nurses and allied health professionals who tackled a frightening surge of COVID-19 patients during November and December.

Otherwise, the funds are targeted to workers who had to report in person and interact with others, often for low wages.

The additional details posted this week say folks such as residential addiction treatment facility workers, home care workers, street outreach workers, group home workers, preschool and childcare employees and cleaners, food servers and maintenance workers in seniors’ housing are all among public-sector staff who will automatically receive the benefit from their employers. This includes employees who work for provincially funded non-profit organizations.

Private-sector employers can apply to the government for money to pay frontline workers at gas stations, in food manufacturing, food and medical supply transportation and in dentist and doctors’ offices.

The government will also send private employers an extra 7.7 per cent of the funding to cover employment insurance and Canada Pension Plan premiums on the extra wages. Copping said he doesn’t want unexpected costs to deter employers from applying.

The Opposition NDP says the program is a confusing mess that fails to honour the workers who put their health at risk by showing up in person during the pandemic.

Labour and Immigration critic Christina Gray said the government had nine months to iron out the details of the program. Alberta was one of the last jurisdictions to reach an agreement with the federal government about how to spend the money.

She said the government’s failure to consult with unions and workers is obvious in the program’s bumpy rollout.

NDP community and social services critic Marie Renaud said it is “beyond an insult” to exclude some non-profit social workers from the benefit solely based on who employs them.

“In those early days, it was the non-profit workers who made is truly, truly made us feel like we were all in this together,” she said.

Meanwhile, non-profits say the workers could really use the $1,200 bonus.

Arianna Scott, interim chief executive officer of Food Banks Alberta, said employees worked longer hours during the pandemic when the economic hits left more people unemployed and hungry. The workers sacrificed time with their families and, sometimes, paid extra for more child care so they could report to work.

“People who work in non-profits and charities in general are often on the lower pay scale than many other industries, so that extra financial assistance in a one-time payment would certainly help lots of them,” she said.