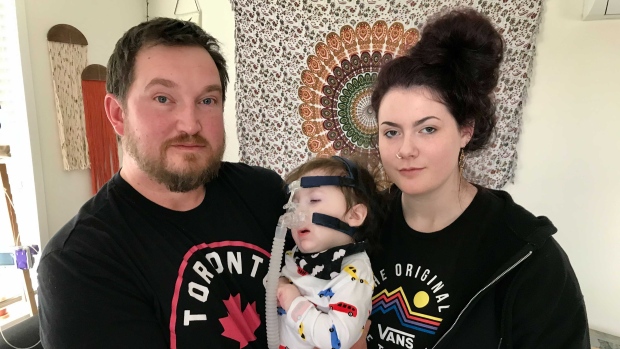 EDMONTON — A local family is looking to the provincial government to fund a pricey, but life-changing treatment for a rare disease.

Reign Johnston was diagnosed a year-and-a-half ago with Spinal Muscular Atrophy (SMA) Type I – a genetic condition affecting his muscle tone as his body does not make the protein to develop muscle.

This condition affects his ability to breath, eat, swallow, and move.

Funding for the drug to help treat two-year-old Reign’s SMA, called Zolgensma, has been approved in similar cases. The gene replacement therapy would significantly improve his quality of life but has a price tag of $2.8 million.

In January, the province announced it would pay for the drug on behalf of families, with funding decisions made on a case-by-case basis.

After two months of waiting, the family’s application has been denied.

Back in January, Reign’s mother Alex Johnston said the family was rejoicing at the news that the province would consider funding Zolgensma treatments.

“It was a huge celebration,” she said. “We were so happy, we thought this was Reign’s chance.

“We thought he was finally getting it after all this time, after all the fighting, fundraising and advocating.”

The Johnsons submitted their application for provincial review as soon as they could. They waited two months for an answer.

“Through this past year-and-a-half we’ve watched every SMA baby dosed,” she shared. “Reign is the only one who is not getting dosed (in Alberta).”

“Babies with the bipap mask in other countries are getting dosed and they’re doing amazing. Kids are walking and getting up and they’re able to sit up from never being able to get up.”

After announcing Zolgensma treatment would be funded, the province clarified eligibility requirements, including that potential patients have to be younger than 6 months.

According to Alex, the province said it would not fund Reign’s treatment because of his bipap machine and gastronomy tube inserted through his belly to bring food directly to his stomach 17 hours a day.

Reign’s father, Ryan Fengstad, said it was shocking that the province did not approve his son for Zolgensma treatment.

“Nobody responded to us for two months,” he said. “It was an agonizing two months.”

“All of his doctors are saying it’s going to help him,” Alex added. “He’s done really well and is strong enough.”

Reign was considered an “ideal” candidate for the treatment by his doctors, Ryan said.

Alex said that getting access to Zolgensma treatment would change Reign’s life forever.

“Zolgensma would actually go into his genes and it bridges the gap, it fixes the broken SMN1 gene… so then his body can produce protein to start building muscle.

“He could come off the mask,” she said. “It could even give him the ability to swallow.”

Simply getting Reign off the bipap mask – even for a few hours a day – would help him “immensely” Ryan said. It would help relieve pressure on his face and prevent wounds from forming.

For this family, the fight is not over. They have already raised about 10 per cent of their funding goal.

“He will beat this disease, I know it,” Alex said.

CTV News Edmonton reached out to the province for comment. They have not yet responded.