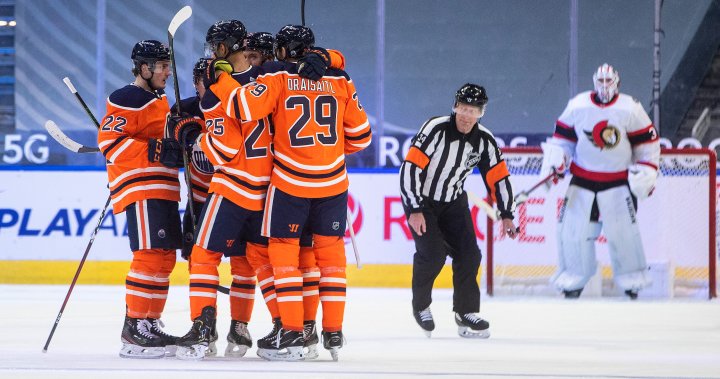 “I was concerned about how our team was going to play as a whole tonight, and I thought the first half they played really well,” Oilers head coach Dave Tippett said after the game.

The Oilers struck early when Darnell Nurse floated a point shot past Ottawa goaltender Matt Murray 3:52 into the game.

“It wasn’t going his way early on and he missed some games and he went down on the taxi squad and really worked his butt off, and I give him tons of credit,” Tippett said of Khaira.

“He’s come back and been a huge part of our team.”

The onslaught continued on the power play when Draisaitl walked around Senators defenceman Mike Reilly and flicked his 12th of the season past Murray. Only 1:18 later, Draisaitl set up Connor McDavid, who made it 4-0 with his 16th.

“When you start off like that and see these guys buzzing around in the o-zone and creating opportunities and getting rewarded, it just kind of puts some life in the group and gives us confidence,” Oilers defenceman Tyson Barrie said.

“I think we put them on their heels a little bit early on and that obviously helps a lot,” Draisaitl said. “Then we had contributions from all four lines, defencemen, (Smith) was great.

“(It was a) pretty complete effort.”

Draisaitl scored another power-play goal in the second, slamming in a feed from Ryan Nugent-Hopkins. Edmonton forward James Neal struck 1:02 later, and the Oilers were up 6-0 after two.

In the third, McDavid put a drop pass back between his legs to Draisaitl, who fired in his hat-trick goal.

“The way he thinks the game and the way he passes the puck on his forehand or backhand, slows the game down and find guys with speed, it’s pretty incredible,” Barrie said of Draisaitl.

Draisaitl has three regular season hat tricks and one in the playoffs.

“He’s just such a strong player,” Tippett said. “He holds the puck, uses his body well — forehand-backhand, it doesn’t seem to matter to him. In tight spots he’s got so much poise with the puck.

–With files from 630 CHED’s Brenden Escott