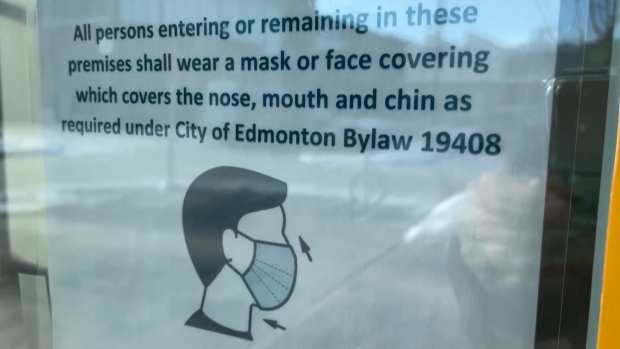 EDMONTON — Edmonton city council is set to discuss whether to keep masks mandatory in the capital city past Alberta lifting most other public health orders on July 1 for Stage 3 reopening.

The matter will come up at City Hall on Tuesday.

A week earlier, Mayor Don Iveson told media “an abundance of caution is required” as Alberta reopens, and that he’s heard requests from local doctors to keep Edmonton’s mask bylaw in place until 70 per cent of Alberta’s eligible population is fully immunized.

According to the latest data, 70.7 per cent had received at least one dose, while 29.2 per cent were fully immunized.

Alberta’s premier has said he hopes cities stay in lockstep with the province as rules are lifted.

On Monday, Edmonton bedroom community St. Albert decided to do just that, voting unanimously to lift local rules on Canada Day with the province. The city brought in its own face coverings bylaw in the late summer of 2020, and suspended it in December when Alberta implemented a province-wide masking mandate.

Calgary’s council, however, decided on Monday to come back to vote on the decision in two weeks’ time.

Mayor Naheed Nenshi called the city’s second dose vaccination rates “really good,” but said he wanted “to make sure enough people have their second dose so that when the Delta variant wave comes, most people will be protected.”

Calgary councillors will consider hospitalization and ICU numbers, case rates, and immunization progress when the conversation is revived on July 5.

According to Nenshi, Calgary Stampede organizers are planning to make masks in indoor settings mandatory.

Regardless of decisions made by municipal governments, an Edmonton doctor reminded the public on Friday the choice is theirs.

“Individual Albertans can make their own decisions and can decide whether or not they wish to participate in large gatherings indoors where potentially there would be risk,” Dr. Noel Gibney, co-chair of the pandemic planning committee of the Edmonton Medical Zone Staff Association, told CTV News Edmonton.

“And they should also decide when and if they wish to mask.”

Masks have been mandatory in all indoor public spaces in Edmonton since Aug. 1, 2020.

Between then and June 13, City of Edmonton enforcement officers have handed out 7,412 warnings and 440 tickets related to the mask bylaw.

With files from CTV News Calgary